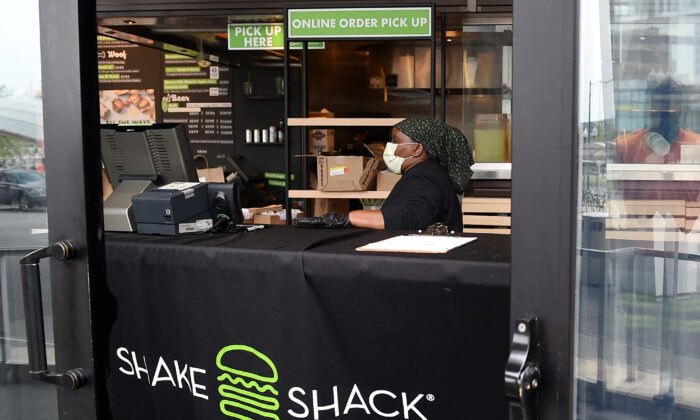 A Shake Shack employee wears a masks as she prepares food orders for pickup during the Coronavirus pandemic in Arlington, Virginia, on April 20, 2020. (OLIVIER DOULIERY/AFP via Getty Images)
By Emel Akan

The Small Business Administration issued $350 billion in PPP loans before it ran out of money on April 16. The agency resumed taking applications on April 27 after Congress authorized an additional $310 billion funding for the program. Businesses can apply for these loans through SBA’s approved lenders across the country.

The program provides an incentive for small businesses that can maintain employees and wages during the crisis. The loans will be forgiven if employees are kept on the payroll for eight weeks and the money is used for salaries, rent, mortgage interest, or utilities.

Of the public companies that have received PPP loans, more than 75 percent come from the manufacturing, accommodation, and food services sectors, according to the Morgan Stanley report.

“For public companies who have disclosed receiving funds, JPMorgan Chase has provided $92.6 million or 31 percent of the total,” the report stated.

The loans are provided to businesses with fewer than 500 workers but the report shows that the public companies that have received the loans have employee numbers ranging from 14 to 10,480.

For example, DMC Global, with a market valuation of more than $350 million and 741 employees, secured $6.7 million in PPP loans.

“When this program was launched and we were considering what we could do to enhance our liquidity going into a very unsafe period, we looked at the program and thought, ‘Let’s at least apply,’ and we received it,” he told BizWest, a business newspaper based in Northern Colorado. “If they were limiting it to, at the time, only small businesses, that wasn’t necessarily conveyed.”

DMC Global announced on April 23 that it would return the PPP loan.

President Donald Trump said during a White House press briefing on April 21 that he would request the money back from large companies.

In an attempt to close the loophole, the Treasury Department released new guidelines on April 23, warning big public companies against applying for the loan program.

“It is unlikely that a public company with substantial market value and access to capital markets will be able to make the required certification in good faith,” the guidelines state.

Treasury Secretary Steven Mnuchin said during the press briefing that there would be “severe consequences for people who don’t attest properly to this certification.”

Another report by data analytics firm FactSquared shows that more than 220 companies applied for PPP loans, receiving $872 million from the government’s program.

The company uses artificial intelligence-driven analytics to search regulatory filings of public companies and has collected PPP related data from more than 4,500 filings since April 3, 2020.

According to the FactSquared data, the largest beneficiary is Texas-based Ashford Hospitality Trust that received $76 million in PPP loans. Ashford, the owner of 117 hotels, has laid off or furloughed 95 percent of its workforce, The Wall Street Journal reported on April 22.

The relief program has come under fire due to a loophole in its rules, which allowed hotel and restaurant chains to apply for the PPP loans. Big chains were able to get funds for every location they operate as long as they had fewer than 500 employees per site.

So far, 15 loans worth a total of almost $116.9 million have been returned, according to FactSquared.

Large banks, including Chase and Bank of America, have come under fire after reports that they favored and prioritized larger clients over smaller ones in securing loans.