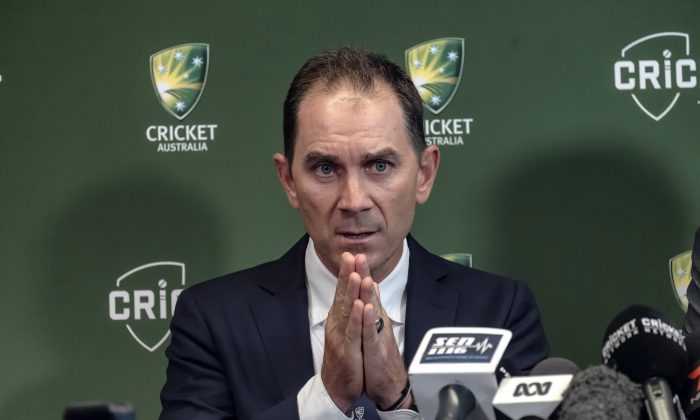 Long touted as Lehmann’s successor, former test opener Langer has landed the role earlier than planned after his predecessor resigned following the Cape Town scandal despite being cleared of any wrongdoing himself.

He takes over a depleted team, with captain Steve Smith and vice-captain David Warner, the side’s two top batsmen, suspended for a year for their roles in the ball-tampering.

Young opening batsman Cameron Bancroft was also banned for nine months for his part in the incident.

“Whilst Darren Lehmann was not due to complete his term until next year, we have had a succession plan in place for this role for some time,” Cricket Australia (CA) CEO James Sutherland said in a media release on Thursday.

“We firmly believe Justin is the right person to lead this team and have huge confidence in what he will bring to the role.”

The 47-year-old Langer scored more than 7,500 runs, including 23 centuries in 105 test matches and has enjoyed success coaching Western Australia state and the Perth Scorchers since November, 2012.

He has acted as Australia’s head coach on an interim basis, in a limited-overs series in the Caribbean in 2016, and at home against Sri Lanka last year.

“There will be some significant challenges ahead for our group, but there is a wealth of talent in Australian cricket that I know will do us all proud,” Langer said.

One of Langer’s first jobs will be to participate in a players’ review launched by CA after the ball-tampering scandal aimed at improving the culture of the team.

He will join men’s test captain Tim Paine and the national women’s skipper Rachael Haynes on a panel along with other former cricketers to draft a players’ “charter of behaviour”.

Australia’s next international matches are an ODI series in England next month.