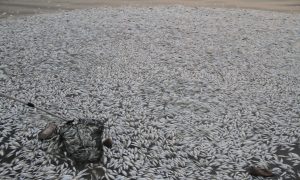 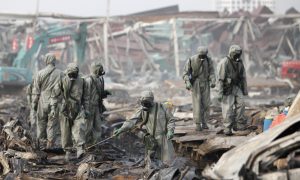 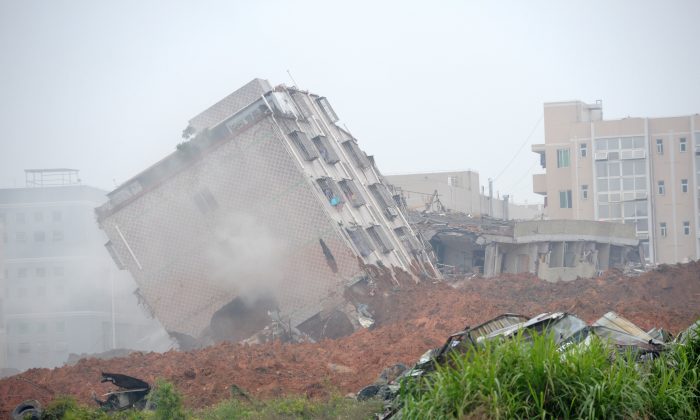 A landslide buried and toppled buildings at an industrial park in the southern Chinese city of Shenzhen on Sunday, Dec. 20. Eyewitnesses and the Chinese authorities have given conflicting accounts of the cause of the landslide, while Chinese netizens lament the latest disaster to strike China this year.

Yang Feng, the head of Shenzhen’s emergency management office, said at a news conference that at least 59 people are missing, and 33 buildings, including two workers’ dormitories, have been buried or “damaged to varying degrees” by the landslide. How many were turned into rubble and how many are merely damaged is unclear. On Monday, Dec. 21, state news agency People’s Daily reported that 85 people in total are missing.

In a video clip on state broadcaster China Central Television’s (CCTV) official Twitter account, a white building is seen crumbling to the ground amid an onslaught of the landslide debris before being quickly engulfed in a huge brown dust cloud.

On Chinese social media, netizens have circulated pictures of industrial buildings submerged in reddish soil, some leaning at precarious angles, others reduced to rubble.

How many of the disasters unfolding around us are natural?
— Internet user on Sina Weibo

At least seven people were rescued from the collapsed buildings, and about 900 have been evacuated, according to the Shenzhen authorities. No deaths have been reported.

At the industrial park, an area of 20,000 square meters (24,000 square yards) has been covered with soil, according to the Ministry of Public Security’s firefighting bureau in a statement.

Unlike most landslides, the collapse in this instance was not due to rains dislodging vast quantities of mud. The composition of the material that inundated the industrial park appeared to be a combination of rubble and topsoil debris that had been accumulated, without being properly secured, for over two years.

A section of China’s West-East natural gas pipeline near the landslide also exploded at the time of the disaster, according to the state broadcaster CCTV.

Mr. Liu, a local resident, told Epoch Times over the telephone that police said that the gas explosion triggered the landslide.

Speaking on condition of anonymity, a woman who lived about a kilometer (0.6 miles) away from the landslide said she heard two explosions first before observing the hill, soil, and water wreck the residential blocks and factories.

The Shenzhen Internet Information Office, however, claims that the landslide caused the gas explosion and collapse of buildings, and not vice versa.

Thus far, Chinese state-run media outlets have only identified the source but not the cause of the landslide—the loose soil piled up against a 100-meter- (110-yard) high hill from two years of construction work. One Chinese newspaper, the Shenzhen Special Zone Daily, said in an online article that the landslide was the result of illegal operations, but didn’t elaborate.

As is typical after natural disasters, Chinese media outlets were quick to focus on the rescue efforts and in particular the involvement of top Party officials in leading them. Chinese leader Xi Jinping and premier Li Keqiang, for instance, were reported to have instructed local authorities to “quickly assemble rescue teams … to try with utmost efforts to reduce casualties,” according to Phoenix Television, a pro-Beijing, Hong Kong-based news outlet.

The Shenzhen landslide comes on the heels of one in mid-November in the eastern China province of Zhejiang. At least 25 people were killed in the landslide, which was triggered by several days of rain.

While Chinese citizens mourn this recent disaster, many have been venting about its man-made character on microblogging sites, a reference to the fact that the tons of material that tumbled down the mountain was caused by human activity—excavated soil that had been improperly dealt with.

At least a few Internet users wondered why the excavated soil dump had survived the earlier rainy summer season, and wondered why it would now collapse in dry autumn weather, according to a collation of online views by Duowei, a Chinese-language political news site.

“How many of the disasters unfolding around us are natural?” wrote “Deep Mountain Creek” on Sina Weibo, a popular Chinese Twitter-like service. “On one hand, we struggle to generate wealth, yet on the other hand, people are ignoring safety, and we are paying the price for it.”

Others draw parallels to a recent man-made disaster in the eastern port city of Tianjin.

“When the Tianjin blasts occurred, I felt that Shenzhen is far away, but after the Shenzhen mudslide, armageddon is indeed possible everywhere in the motherland,” wrote “Uncle Shen” on Twitter.

In August, a storage facility containing poisonous chemicals exploded in a mushroom-shaped cloud and shattered windows of residential buildings over a mile away. Days after the explosion, residents reported dead fish washing up on the banks of the river and complained of burning rain. The huge, gaping crater in ground zero has since been filled up and carpeted with grass.

Gu Xiaohua and Zhou Huixin contributed to this article.