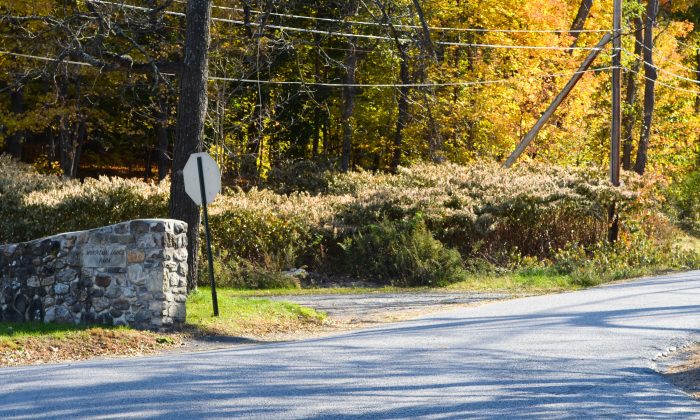 BLOOMING GROVE—The Open Space Institute has purchased a 416-acre parcel in the Moodna Creek Watershed for $881,000. The announcement on Oct. 14 was the culmination of ten years to safeguard what the OSI website calls “a scenic natural area from regional development.”

The institute says the “Mountain Lodge” property buffers two hiking trails—the Highlands Trail and the Long Path—that meet in the Hudson Valley. The property is adjacent to a subdivision and near the 87-17 highway interchange.

The sale, which will be transferred to the state park system, is in line with the Moodna Creek Watershed Conservation and Management Plan, the Orange County Open Space Plan, and the Southern Walkill Biodiversity Plan.

A proposed connection between Schunnemunk Mountain and other regional state parks will create a web of protected greenspace in a quickly-developing region.

“I fully recognize how important it is that we work to preserve our bucolic landscape for future generations,” said Orange County Executive Steve Neuhaus. “This conservation effort preserves an important area of Orange County ensuring public recreational uses for those who love the outdoors.”

Situated adjacent to the 2,700-acre Schunnemunk Mountain State Park, and with ridge-top views of the Hudson Highlands to the east and the Shawangunks and Catskills to the west, the land is expected to become a permanent addition to the park after OSI transfers the property to the state parks system at a later date, according to OSI’s website.

“This newest property builds on OSI’s decades-long commitment to conserve lands for our state parks,” said Kim Elliman, OSI’s President and CEO. “It is especially gratifying that the land will be protected in the face of expanding regional development. We thank our partners at State Parks and The Peter & Carmen Lucia Buck Foundation for their assistance in protecting this land.”

“We are very pleased to have been involved with this acquisition of 420 acres of significant open space in the Hudson River Valley,” said D. Ben Benoit, Executive Director of The Peter and Carmen Lucia Buck Foundation, Inc. “The Foundation’s program-related investments enable land conservation groups to move quickly in making key land acquisitions in New York and Connecticut. The Mountain Lodge project is an illustration of how program-related investments can accelerate the pace of land conservation.”

OSI has a longtime commitment toward creating and adding to New York’s state parks. The Institute has added more than 40,000 acres to the state’s park systems in almost 80 purchases over the past 40 years.

Both the Highlands Trail and the Long Path are maintained by the NY-NJ Trail Conference (NYNJTC). Long-distance hikers have enjoyed the scenery in both states. The Highland Trail links the Delaware with the Hudson river for nearly 150 miles. The Long Path extends 357 miles from the 175th Street Subway Station in New York City to John Boyd Thacher State Park near Albany.

“Long-distance recreational trails are key in getting more people to experience and develop a stake in the great outdoors,” said Glenn Oleksak, Chair of the Highlands Trail West Committee of the NYNJTC. “Land conservation achievements like Mountain Lodge are critical for the long-term success of these trails, in addition to creating important wildlife corridors.”

Mountain Lodge Park is in the Town of Blooming Grove on the western slope of Schunemunk Mountain, the highest in the county. One side of the park has Glenwood Hills, a subdivision of year-round residential housing which was developed in the 1950s through 1970s.

Moodna Creek is a small tributary of the Hudson River and is the longest stream located entirely within the county. The creek reaches Warwick and 21 other communities and is crossed by the Moodna Viaduct, the longest actively-used railroad trestle east of the Mississippi.