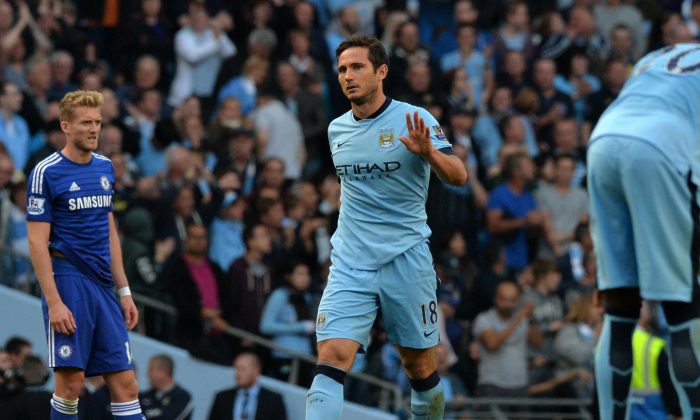 Frank Lampard acknowledges the crowd after scoring the equalizer in English Premier League action between Manchester City and Chelsea at the Etihad Stadium in Manchester on September 21, 2014. (Paul Ellis/AFP/Getty Images)
Soccer

Manchester City and Chelsea finished 1–1 at the Etihad on Sunday, but not without an unbelievable turn of events, courtesy Frank Lampard.

The English Premier League contest was already destined for a incredible storyline with Jose Mourinho’s masterplan working to perfection once again. Chelsea held a 1–0 lead heading into the final five minutes of regulation time after having been on their heels for most of the match defending admirably.

That is, until a former lieutenant in his army stabbed him in the back, in a manner of speaking.

Lampard, Chelsea’s all-time leading scorer, entered the game in the 78th minute and volleyed home the equalizer in the 85th as he’s done so many times for his former club. He gave his temporary club, Manchester City, a valuable point.

Lampard didn’t celebrate his goal out of respect for his former club and their fans.

“It was completely surreal,” Lampard said in an interview on Manchester City’s website.

“City certainly didn’t deserve to lose the game…But for me to come in there, try to do my job, get a reaction from my old club, that was amazing.”

“It was a strange but pretty special day,” Lampard said.

James Milner, who set up Lampard, nearly set up him up again for the winner in similar style, but the latter’s left-footed strike was blocked by the Manchester City defense. It would have been just too much had Lampard notched a brace and given 10-man City the win.

Chelsea had taken the lead in the 71st minute after an intricate counterattack resulted in the German Andre Schürrle tapping home the opener. This was a counter executed to perfection starting deep in the Chelsea end and using the width of the park before Eden Hazard found Schürrle with a goal-mouth cross.

Just five minutes earlier, Man City’s fullback Pablo Zabaleta got his marching orders after a second booking for a foul on Diego Costa. This was the catalyst the match needed to come to life.

Chelsea had come to the Etihad to earn a draw and had shown little in the way of attacks up to that point. They were prepared to “park the bus” and soak up Man City pressure. The Blues knew that City had to take the initiative in their home park already trailing the leaders by five points.

Mourinho has been in this situation many times—on the road against a worthy opponent. He played with Diego Costa as his lone striker and packed the midfield with five men, making his formation difficult to break down.

Manchester City, as expected, controlled the game but were unable to seriously threaten Thibault Courtois in the Chelsea goal. They looked most threatening after having equalized and playing with 10 men.

“To speak about Frank is to speak about my past with Frank—the player he was for me and what he means in my career,” Mourinho said. “I am never tired to speak about this, but from the moment he is a Man City player I don’t speak about other teams’ players.”

For Mourinho, it was important not to lose.

Chelsea and Manchester City are seen as the two principal contenders for the Premier League crown. The London club does look the part so far having won all four of their prior matches coming into Sunday’s blockbuster.

City have had a much harder schedule and have dropped points at Arsenal and, uncharacteristically, lost at home to Stoke City.

While it is too early to compare this Chelsea side with the Jose Mourinho-led title-winning sides of 2005 and 2006, this year’s side has started in similar fashion by winning its first four games. Chelsea’s 2009–10 team also won its first four matches en route to the title.

The schedule has been kind to Chelsea with Everton being the only side they’ve faced so far that finished in the top half of the table last year. The Blues have also faced two of the three newly promoted sides.

At this early stage in the season, there’s no such thing as a “must-win” but Man City did not want to fall eight points behind Chelsea by losing another home game. And through their association with New York City FC, a new Major League Soccer franchise for 2015, they managed to keep pace with Chelsea.

Lampard on loan to Manchester City from New York City FC, hadn’t faced Chelsea since his days with West Ham United in 2001. He became the only player to score against 39 different English Premier League clubs.