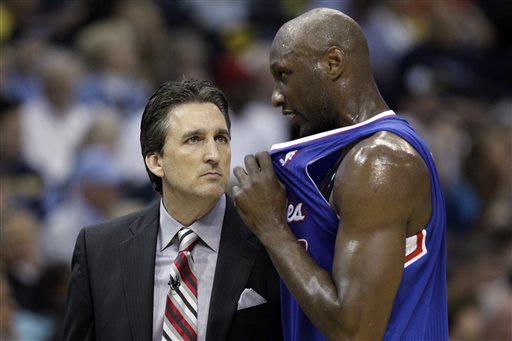 Lamar Odom, right, talks to Los Angeles Clippers coach Vinny Del Negro, during the first half of Game 6 in a first-round NBA basketball playoff series in Memphis, Tenn., Friday, May 3, 2013. Since becoming a free agent Odom has reportedly become addicted to drugs and family and friends fear he has vanished to go on a drug binge. (AP Photo/Danny Johnston)
Sports

Lamar Odom News: Odom Has Gone Missing, According to Family and Friends

Family and friends are worried that Lamar Odom, who has been unreachable for nearly 72 hours, has gone on a drug binge, according to a report.

Sources connected to Odom, a professional basketball player who is currently a free agent, told TMZ that the main concern of family and friends is that Odom is hiding out while doing crack cocaine.

Odom, 33, was recently thrown out of his house by wife Khloe Kardashian after an attempted intervention.

Odom has reportedly not been in a good state since becoming a free agent at the end of the NBA season earlier this year.