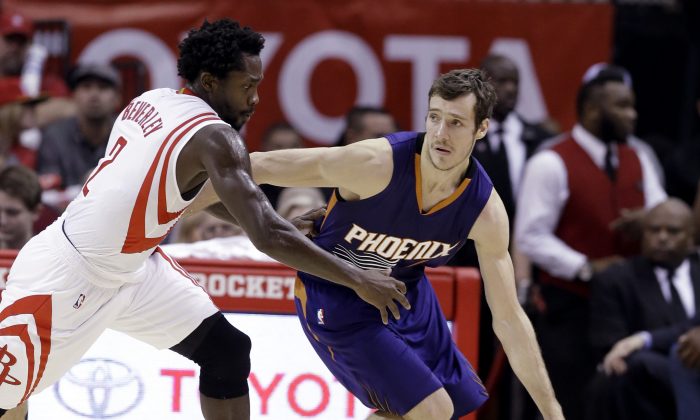 The NBA trade deadline is fast approaching, and the Los Angeles Lakers could easily make at least one move before it hits in a few weeks.

The Lakers are struggling with one of the worst records in the league, but are constantly on the look out for deals since the team can only improve so much through the draft, leaving trades and free agency as primary methods to bolster the roster.

Kobe Bryant will likely return next season, as will this season’s lottery pick Julius Randle. Beyond them and Nick Young, the team has few players under contract.

Top targets that have emerged–whether via trade or free agency–include Goran Dragic, Rajon Rondo, and Taj Gibson. The first two will likely be free agents after this season, while Gibson has been rumored on the block.

The Lakers don’t have a ton of assets but do have some, including improving big man Jordan Hill, and Jeremy Lin, who has an expiring contract.

Noting that the Lakers want Dragic, he pointed out that the Lakers “don’t have much to offer.” The team could also hedge by hoping Dragic will sign with them in free agency, if he turns down his $7.5 player option seeking a raise.

Nick Young told the L.A. Daily News recently that he spoke with Dragic as part of his recruiting efforts. “‘You might be my teammate next year,” Young said, also noting that he’s reached out to Marc Gasol among others. Kobe has also said that he’ll be recruiting, though he hasn’t mentioned specific names outside of Rondo.

Gibson has been linked to multiple teams including the Lakers, the Toronto Raptors, and the Detroit Pistons.

“In recent weeks, he has not played with the energy for which he has been known, and there has been speculation that he is frustrated with the addition of Nikola Mirotic and Pau Gasol (though his playing time has not changed much). Gibson has two years and $17.4 million on his deal, which is a problem in moving him,” Deveney noted.

If the Lakers can snag one or two top-tier players via a trade or free agency, and team them with Kobe and Randle–and a top-five draft pick if the Lakers end up in the bottom five in the league–then Los Angeles could actually field a nice squad next season.

One player who will not be going to L.A. is Kevin Love. He was asked on February 8 if he’d have any interest in becoming a Laker, then if there was any scenario where the Lakers would be an option. “No,” he said, reported Dave McMenamin of ESPN.

As for Hill, Deveney said: “Early in the year, interested teams were told that Hill would not be available. That has not stopped the interest in Hill, who is averaging 12.3 points and 8.0 rebounds, and can potentially be a free agent next summer because he has a team option in his contract. Hill is out with a quad injury and may not play until the deadline hits, but interest in him will remain high.”

The team option is particularly attractive, because teams can essentially give Hill a tryout for the rest of the season before deciding whether or not to keep him.

The market for Lin “has been weak,” but despite his struggles this season Lin makes a strong backup point guard who can provide both passing and scoring off the bench. On a few teams, he could also warrant a tryout as a starter. Since Lin will be an unrestricted free agent this season, a rebuilding team might opt to give him a tryout as well.