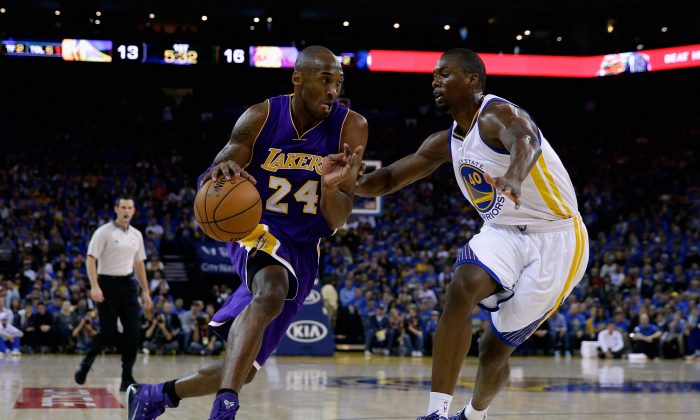 The Los Angeles Lakers are still looking for their first win, and their four-game losing streak has spawned a number of news and rumors.

Bryant to Get Traded?

The most recent Lakers rumors indicate that Kobe could get traded, although it seems to be speculation.

ESPN’s Chad Ford says that Lakers general manager and other team executives could follow the Philadelpha 76ers “and let his team slide into oblivion this season.”

“The final option is for the Lakers to convince Bryant to waive his no-trade clause and let the team trade him. If Bryant can show over the next month or so that he’s healthy, several teams that are trying to compete for titles could show interest,” Ford said.

“A reunion with Phil Jackson in New York would be especially possible, and a trade that netted the Lakers young players like Iman Shumpert and Tim Hardaway Jr. along with a 2015 first-round pick and a big expiring salary like Amar’e Stoudemire’s or Andrea Bargnani’s could meet the Lakers’ needs.”

Rick Fox, a former teammate of Bryant’s, suggested recently that the star may want to move on.

“I would not put it past him. If there isn’t a real opportunity for [Bryant] to win a championship there, the thought of him leaving may shock Lakers fans, but I wouldn’t put it past him going in search of one or two more championships,” he said in a recent interview with Larry King.

“Personally, I think it’s going to get done in New York. I really do. I just believe in Phil (Jackson). I’ve been around him. I know Kobe has had his greatest success with Phil in a leadership capacity. So the reuniting of the two is not an unrealistic thought.”

The Lakers got their third loss of the season against the Clippers in the first night of a back-to-back but Kobe Bryant said that Jeremy Lin really stepped up.

The score was tied with less than five minutes left when Lin waved Kobe off, drove off a pick-and-roll, and drained a 3-pointer.

Bryant loved it and was upbeat despite the loss.

“It’s important for him to have that toughness and to say, ‘I believe in myself. I can step up, I can make these plays, I can perform.’ I think that is very, very important.”

Lin and Bryant have been keeping constantly in touch, exchanging text messages late into the night and talking during the game about how to get better.

Lin said that he’s been feeling empowered by Bryant and coach Byron Scott, who have told him to take charge of the offense and not be afraid to shoot.

“I’m like every other human,” Lin said. “I’m going to be more comfortable, I’m going to do more, when I feel empowered.”

OAKLAND, Calif.—Klay Thompson celebrated his big payday with a breakout performance against the player he idolized as a kid growing up in Southern California.

Thompson scored a career-high 41 points in his first game since signing a contract extension, teaming with backcourt star Stephen Curry to carry the Golden State Warriors past Kobe Bryant and the winless Los Angeles Lakers 127-104 on Saturday night.

Thompson, who inked a four-year maximum extension worth about $70 million Friday, shot 14 for 18 from the floor. Curry added 31 points and 10 assists, and the Warriors withstood Bryant’s big plays to thrill a blue-shirt wearing sellout crowd of 19,596 in the team’s home opener.

“It was like the rising star at that position going against the guy who’s been the best for 15 years,” Warriors coach Steve Kerr said. “It was fun to watch.”

Bryant scored 19 of his 28 points in the third quarter and nearly brought the depleted Lakers back with one improbable shot after another. Instead, Thompson smothered Bryant in the final quarter — holding him to one point — and Los Angeles lost its fourth game in five nights.

The Lakers are 0-4 for the first time since the 1957-58 season when the franchise was located in Minneapolis.

“Just stay the course,” said Bryant, who shot 12 of 28. “We still have a lot of room for improvement, but we’re moving in the right direction.”

Bryant was at least pleased with the progress the Lakers showed at the end of a trying first week.

The team already has ruled Steve Nash out for the season because of a nagging back injury and first-round pick Julius Randle broke his right leg, ending his rookie campaign. The Lakers are also playing without Nick Young (right thumb) and Ryan Kelly (sore right hamstring).

Warriors power forward David Lee sat out with a strained left hamstring for the second straight game, which Kerr attributed to another slow start. Unlike the Lakers, though, Golden State could lean on its talented tandem and a deep roster to eclipse Bryant’s brilliance.

Jordan Hill finished with 23 points and five rebounds to help the Lakers build a 43-33 lead in the second quarter, a run that silenced the crowd and had Warriors co-owner Joe Lacob sitting in a courtside seat with his hand under his chin staring into the stands in frustration.

That was a familiar look last season when Lacob’s team lost several home games to inferior competition, which played a part in Mark Jackson’s firing. This time, Kerr called timeout and got his team to respond.

Golden State scored 14 straight points and ended the half leading 61-55 behind a series of scintillating highlights — including a behind-the-back pass from Curry that led to a dunk for Andre Iguodala.

All of Bryant’s brilliance, including a twisting layup while getting fouled by Festus Ezeli late in the second quarter, couldn’t lead the Lakers to victory. He showed off an array of fadeaways and runners in the third quarter that even left some Warriors fans wowed.

“He was making some crazy shots,” Thompson said.

But Golden State’s dynamic duo erased anything Bryant did. Thompson made 5 of 7 shots from 3-point range, and Curry finished 10-of-19 shooting, including 3 of 8 from beyond the arc.

“It’s tough to stay on top,” Thompson said. “They’ve had their great runs. I think it’s the Warriors’ turn, man.”

Warriors: Thompson’s previous career high was 38 points in the home opener against the Lakers last season. … It was just the second time Curry and Thompson each scored 30 points in the same game.

QUOTE OF THE NIGHT

“These guys, man, you can’t blink against this team. … When you blink, they bust the game wide open.” — Bryant on the Warriors.

Scott Won’t Make Any Changes Yet

Coach Scott says that he won’t make any lineup changes yet.

He told the Los Angeles Daily News that he’ll wait until about 15 to 20 games into the season to make any changes.

The starters have been under scrutiny, particularly Carlos Boozer and Wesley Johnson.

Ed Davis looks like he may break into the starting lineup in place of Boozer, unless Boozer picks up his game.

Nick Young could break in at small forward if he returns healthy and strong. Ryan Kelly is also injured at the moment.