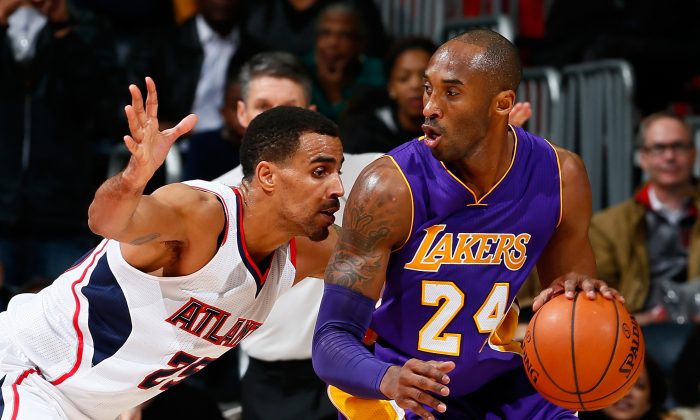 The Lakers are on an upswing with the return of Nick Young and a tough win over the Atlanta Hawks, while the team is also eyeing some free agents.

The Lakers got their second win of the season but Kobe Bryant is still the target for a lot of criticism, especially as he’s been missing a lot of shots.

Bryant made more than 45 percent of his shots for the first time this season against the Hawks.

He’s now 291 points behind Michael Jordan in his career, becoming the fourth NBA player of all-time to score 32,000 points.

Bryant was asked after the game if he heard the chatter that his shot volume was so high this season because he wanted to pass Jordan.

There’s always something, especially with me,” Bryant told reporters, per the Los Angeles Times.

“First, it’s ‘I can’t come back and play.’ Now it’s, ‘Well he’s not playing well enough.’ Well you just said I’d be in a wheelchair and I wouldn’t be able to play at all. I won’t even waste my time trying to shut people up.”

“It’s a lot of work over 19 years,” Bryant added in terms of the points.

The Lakers offense ran well against the Hawks, with Bryant passing more and shooting only 18 shots, and Carlos Boozer, Jordan Hill, Nick Young, and Jeremy Lin all scoring in double figures. Lin also had 10 assists.

Nick Young returned from injury and helped the Lakers get the win over the Hawks.

“It’s like my swag just rubbed off on everybody,” Young said after the game. “It’s unbelievable.”

The L.A. Daily News noted after the game that Young’s return to the lineup injected all sorts of energy.

“He provided the Lakers (2-9) a definitive scoring option to complement Bryant. Young also lightened the Lakers’ mood with his playful personality that included plenty of smiles and trash talk.:

Bryant said Young’s presence “lifts the spirit of the guys.”

“It keeps things light. I think it’s great,” he said. “That’s great leadership from that standpoint.”

“Swaggy P is not a superstar and is not going to miraculously propel this team to the playoffs,” noted Lakers Nation before the game.

“What he is, however, is a player who can get his own shot and create offense for the team in a hurry. He’s not going to drop a bunch of dimes, but he poses a threat to opposing teams’ defenses in a number of ways, which essentially alleviates some of the offensive pressure placed on his teammates. He can knock down the long ball, but can also penetrate at times and can certainly draw multiple defenders to him when he handles the ball. This will certainly take some of the pressure off of Kobe Bryant.

“Conversely, he doesn’t need to handle the ball in order to score. Last season, 47.6 percent of his two-point field goals were assisted, and 79.3 percent of his three-pointers were as well. This is paramount because the ball is still going to be in Kobe’s hands the majority of the time.

“Whereas Young can score with the ball in his hands and take pressure off of Kobe, he is more than comfortable playing off-ball as well and as long as he maintains his aggressiveness, Kobe will likely look to get him the ball.”

The Lakers had a long film session on Monday night as well as a meeting about what they can do differently.

The session focused on the Lakers defense, which has averaged a league-worst 112 points per game.

“The question to the guys was, ‘Are we asking you to do things that are impossible for you to do,'” coach Byron Scott recalled.

“‘Or are there things you have to think about too much? Because we’ll try to simplify everything as much as possible.’ The answer they gave was no. It’s not impossible and not difficult.”

Ronnie Price spearheaded the meeting and was the only player who spoke up.

“Everyone shares things differently each time,” Price said. “I just talked about the same things we’ve been talking about for the past four weeks.”

Scott said that he used new motivation to get players to buckle down, especially in the final minutes of the game.

“The fact I told them that if they didn’t play, I would take them out,” Scott said. “That had something to do with it.”