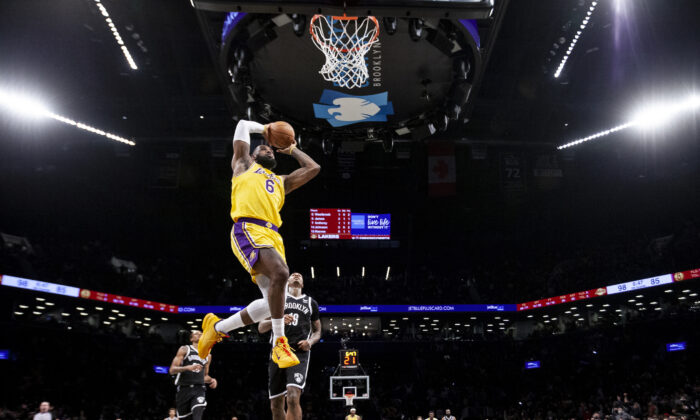 Lakers Defeat Undermanned Nets 106–96 With the Return of AD

The Los Angeles Lakers return to .500 (24—24) after dominating the Brooklyn Nets Tuesday night, without Kevin Durant and Kyrie Irving, as Anthony Davis returned after sitting out 17 games.

James led the Lakers with 33 points, on 14 of 21 shooting, seven rebounds, six assists, and three steals; he is the oldest player who has scored 25 points or more in 17 straight games.

Davis returned from an MCL knee injury as the Lakers have lost 5 of their last 7 games.

“His anchor to our defense is something that’s been sorely missed,” said Lakers coach Frank Vogel.

Davis added eight points in 25 minutes of play on 3 of 8 shooting, two rebounds, and two assists.

“Obviously right away you see what he’s capable of,” said James. “We draw a play right to start the game, I was able to turn the corner and threw a late lob that he was still able to throw home. So very exciting to have him back.”

Vogel added regarding Davis’ return, “With limited practice time, we are still viewing these first few games as not out of the woods yet. … This is going to be his reconditioning phase.”

Malik Monk was red hot off-the-bench for 22 points, five rebounds, and six assists; scoring 16 points in the first half.

James Hardin led the Nets with 33 points, twelve rebounds, and 11 assists; while the remaining starters combined for just 36 points, and nine assists.

Harden was asked about a Bleacher Report story reporting his frustration with the Nets.

“I don’t know about any reports,” said Harden. “Of course I’m frustrated because we’re not healthy, there’s a lot of inconsistency for whatever reason. Injuries, COVID, whatever you want to call it. So yeah, it is frustrating. I think everyone in this organization is frustrated because we are better than our record is and we should be on the way up.”

The Nets had cut the Lakers lead to 71–69 with 6:18 remaining in the third quarter with Harden making three free-throws following Bradley’s foul on Harden’s three-point attempt.

But the Lakers rallied to extend their largest lead, 100–85, after James’ back-to-back steals for dunks that ignited the crowd with 6:45 left in the game.

The Nets led the NBA in free-throw percentage, but made only 15 of 22 for 68 percent; while the Lakers were perfect with 10 of 10. The Nets had a big advantage in rebounds with 54 to the Lakers 33. The Lakers only had five offensive rebounds.

That was offset by the Lakers better shooting percentage of 47.2 to the Nets 42 percent; the Lakers were 12 of 38 from threes, while the Nets only made 7 of 27.

The Lakers dominance was also evident in the advantage of 12 to five steals, and nine to two blocks; they also had 27 fast break points to the Nets nine.

The Lakers continue their road trip at Philadelphia on Thursday; while the Nets host Denver on Wednesday.