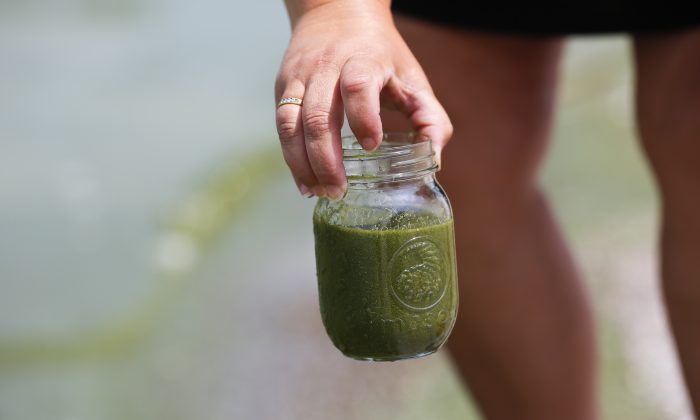 Carol Snyder of Northwood, Ohio holds up a jar with water collected from Lake Erie at Maumee Bay State Park August 4, 2014 in Oregon, Ohio. Toledo, Ohio area residents were once again able to drink tap water after a two day ban due to algae related toxins. (Photo by Aaron P. Bernstein/Getty Images)
US

On Monday, cities in Ohio and Michigan lifted a three day restriction on drinking tap water. But experts say the threat of harmful algae blooms linked to the water contamination will remain in Lake Erie for years to come.

Since the early 2000s, scientists have observed that all the Great Lakes—and many other lakes across the United States—erupt in an annual green flourish of algae.

“If we were going to shut off the tap of all the nutrients we would still have a residue of nutrients that would keep the blooms coming. This is a long term problem,” said Dr. George Bullerjahn, researcher and biology professor at Bowling Green State University (BGSU) in Ohio.

Bullerjahn has studied algae blooms throughout the Great Lakes. He said although farmers have become more mindful of their fertilizer use, the nutrients that feed the algae never filter out of the lake. Each year the algae bloom dies, but the phosphorus remains for its next generation.

“I do have some optimism that the agricultural community is responsive to this. But due to the legacy of the phosphorus in the lake sediments this is going to take years, and years, and years, to really sort this out.”

Algae blooms have become a fairly predictable feature of Lake Erie, but this summer the lake’s western edge was deemed a public health hazard, thanks to a particularly high concentration of cyanobacteria—a microcystin toxin that causes liver and kidney damage.

Last week, the microcystin in the Toledo city water supply tested up to three times the safety limit set by the World Health Organization. An intense chemical treatment was required to bring the microcystin to safe levels (one part per billion). Toledo’s water treatment facility reportedly spent about $4 million in chemicals last year alone to address toxic contaminants.

Despite the drinking water ban, Bullerjahn believes the risk last weekend was actually quite low. “I think the big problem would be if we were above the threshold for a month or a year, and people would be ingesting the water and this low level of toxin could contribute to some liver damage down the road,” he said. “Three days with an elevated toxin I would think would have very, very little impact.”

“While some people may second guess public officials who imposed the drinking water ban, I think the same critics would be much more vocal and critical were no ban imposed and the citizenry sickened,” said Dr. Mark Holland, biology professor at Salisbury University in Maryland in an email.

Thankfully, not all of the algae overgrowth is dangerous. Scientists say that in a couple of months the water may still be green, but the toxic algae genotypes may be much lower. However, determining when the toxic algae could return may be hard to predict.

Bullerjahn suggests that public health experts, elected officials, and toxicologists should work together “to develop a more measured policy instead of just shutting off the water.”

Scientists may have no way to stop the algae, but they can address its impact. BGSU scientists hold a patent for satellite imagery that can do remote sensing on the algal blooms.

This technology can detect exactly where a bloom begins to form, and see what factors contribute to it. This information can alert water treatment plants to prepare for toxic overgrowth, and notify beaches and commercial fisheries of nuisance blooms.

“We’re working toward a better situation, but it’s never going to be great,” said Dr. Bullerjahn. “Things are degraded to where there are going to be blooms for a very long time if not forever, but there’ s an awareness of how to make things a little bit better.”