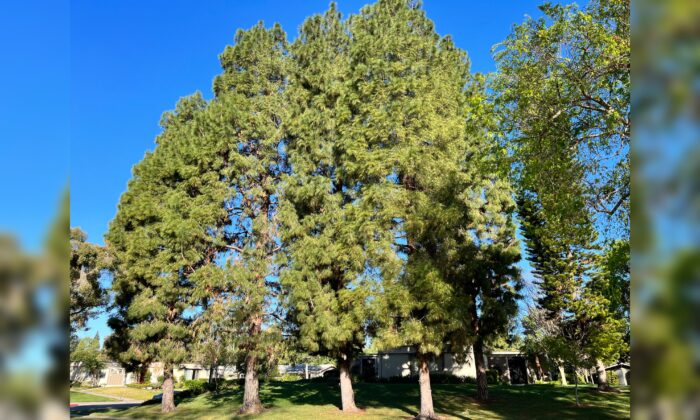 Correction: The tree inspection and removal evaluation were initiated by the retirement community, instead of the Laguna Woods City Council. The Epoch Times regrets the error.

When developers began constructing the Village over 60 years ago, they over-planted these pine trees for more curb appeal. Many of the groves of three to nine trees were planted near buildings, carports, and sidewalks.

Weimann said the community’s Board of Directors tasked its staff and arborists, who are all self-identified as “staunch tree huggers,” to evaluate six attributes impacting the approximate 1,100 Canary Island pines in the retirement community to determine whether the trees should be removed.

Of those 1,100 trees, 393 were identified with one or more attributes, but roughly 100 trees did not meet the criteria for removal.

“We have rules about tree removals,” Weimann said. “Taking them down because they cause a mess is not permitted.”

According to the community’s United Landscape Committee, reconstructive trimming of the Canary Island pines would cost an average of $1,320 per tree, whereas removal averages $1552 per tree.

Some of the trees sit as close as five feet from the buildings, and trimming only one side of a tree would cause an “unbalanced canopy,” ending up hurting the tree, according to Weimann.

However, since the discussion of these longstanding evergreens came into the public, residents who opposed the removal spoke out.

“I have three Canary Island Pines sheltering my balcony,” Linda Yatchman wrote to the Laguna Woods Globe. “I would have never bought this place if it weren’t for the trees providing shade, shelter for birds, and blocking the view of the parking lot.”

Helen Bazuin also wrote to the Laguna Woods Globe, “Please reconsider cutting down 393 Canary Island Pines. Once they are gone, the empty spaces cannot be easily filled, and the ecological and aesthetic benefits they provide will have disappeared permanently.”

During a few recent public meetings, over 30 residents also voiced their concerns citing environmental concerns and the potential loss of aesthetics.

In response, the community’s landscape committee decided to put the project on hold for further review.

They plan to re-examine the identified trees with an environmental specialist and third-party arborists to meet the needs of the urban forest and the quality of life for their residents.

“The trees have been there for 60 years,” Weimann said. “We are in no hurry to take them out.”