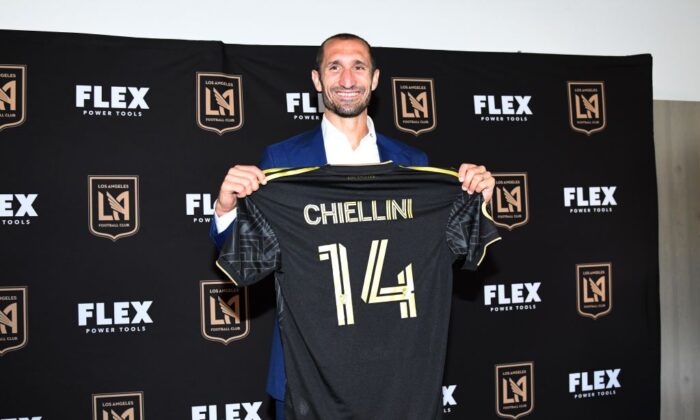 Defender Giorgio Chiellini poses with his jersey after he was introduced by Los Angeles Football Club during a news conference at Banc of California Stadium in Los Angeles on June 29, 2022. (Kevork Djansezian/Getty Images)
Soccer

Chiellini and Bale Debut in LAFC Win at Nashville 2–1

International signings Giorgio Chiellini and Gareth Bale made their debut for the Los Angeles Football Club (LAFC) in their first meeting Sunday against Nashville Soccer Club resulting in a 2–1 road victory at Geodis Park, as Cristian Arango and Jose Cifuentes continue their scoring streak.

The win snapped a two-game winless streak away and retook the Western Conference, and overall MLS, best record of 13–4–3 record (42 points)—Austin FC has played one more game with a 12–5–4 record (41 points).

The former Italian captain Chiellini got his first start following his arrival two weeks ago and played 60 minutes.

“A player of his caliber he prides himself in not making mistakes and he can get on the plane tonight and say he played a mistake-free game,” LAFC coach Steve Cherundolo said. “So he is a world-class defender and he is an amazing human being in the locker room.

“We’re ecstatic to have him here and it was really important for us to get him and Gareth to win in their first game.”

The Welsh captain Bale came in the 71st minute after arriving to LAFC over a week ago.

“It was excellent,” Cherundolo said of Bale’s performance. “Every touch was great and his qualities on the ball is incredible. He is also big and physical and can run and as we didn’t see it tonight but a fantastic finisher.”

“With only a few training sessions in his legs to get 20 minutes out of him was also great. So he is in the middle of his pre-season, and to get minutes [was] valuable minutes for him.”

The match was statistically even with equal ball possession, and total shots with 13, while LAFC had the edge with five shots on goal compared to Nashville’s three.

Cristian Arango leads the club with eight regular season goals, scoring six of those in his last seven games.

Arango received a pass from Ryan Hollingshead in the 27th minute that Jose Cifuentes allowed to go through his legs on a “dummy run” reaching Arango at the top of the box.

Arango stretched to reach the ball resulting in it skipping over the defender two yards beyond the corner of the six-yard box, where he sharply cut the shot back left against the grain into the left side-netting past Nashville’s defenders and a diving Joe Willis.

Nashville would equalize in the 43rd minute after Video Review confirmed LAFC’s Ilie Sanchez had dragged down C.J. Sapong on a corner kick as Sanchez fell after colliding with a Nashville player while marking Sapong.

Hany Mukhtar placed the penalty shot low off of the inside of the left post after his fake forced goalkeeper Maxime Crepeau to the right to end the half at 1–1.

LAFC immediately responded in the first minute of the second half, beginning with a back pass to Carlos Vela nine yards beyond the right-center of the box for a lofted pass to Hollingshead—whose header into the ground bounced off the right post; Arango had just over-ran the deflection leaving Cifuentes a blasted goal on a silver platter from a few yards away.

“In the second half, our press and our defensive structure had a little more energy to it, which I think made the difference in the game,” Cherundolosaid. “This is a tough place to play. Nashville has a very physical team and they make it difficult to break them down.”

Following the game, the new European additions mentioned acclimating to the extreme heat and humidity of Nashville; Chiellini stating that his teammates helped him get through it after a two-month layoff after Juventus.

“I’m very happy because it’s a difficult away game,” said the former Juventus captain Chiellini. Adding that it was important to re-claim first place in the MLS, and hold that position for a “trophy.”

The style of play is “a little bit different from what I’m [used to] in Italy,” Chiellini said, adding that he has been following the team and the league all season. “I can help my team in order to be more compact and more solid—and to control the game in the best way” to avoid counter-attacks and minimizing opportunities for the opponent.

Bale stated that the match “felt amazing, I was itching on the bench. I wanted to try [to] help the team play some minutes. Important also for me individually that I get my fitness—it’s the end of the season in Europe.”