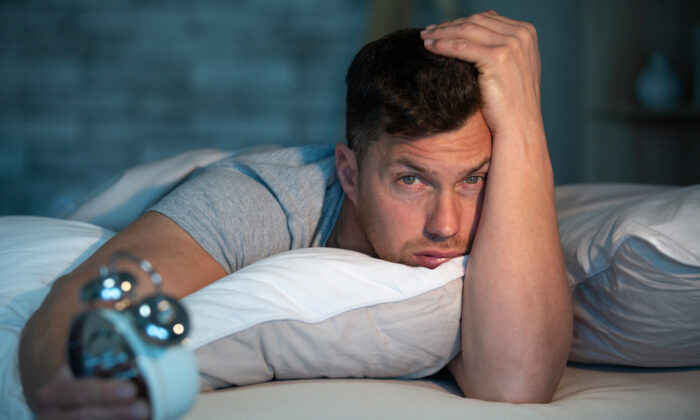 Getting enough sleep each night can be difficult for some, but research has found that lack of sleep can negatively impact your body. (ShutterStock)
Health & Safety

Lack of Sleep Is Becoming Common, Can Affect Health in Many Ways

The frequent use of electronic devices in everyday work and life has led to many people experiencing sleep deprivation and poor sleep quality, which in turn, affects many aspects of health, according to several studies.

One health issue is related to vision. Long-term sleep deprivation impairs the corneal epithelial stem cells and could lead to corneal opacity and other vision problems, according to research done by China’s Xiamen University  in affiliation with Harvard Medical School and University of Toronto, Canada, this May.

The corneal epithelium, made up of epithelial tissues, plays an important role in maintaining transparency, protecting corneal health, and acting as a barrier to protect the cornea from bacterial invasion.

Researchers from UC Berkeley have found that insomnia increases anxiety levels by up to 30 percent the next day, according to their article “Overanxious and underslept” published in the journal Nature Human Behavior.

Anxiety disorder is the most common mental health problem in the United States, with approximately 40 million people, or 18 percent of the U.S. population, suffering from anxiety each year, according to the Anxiety and Depression Association of America.

Dr. Wu Guobin, director of Taipei’s Xin Yi Tang Chinese Medicine Clinic, told The Epoch Times that the most optimal length of sleep is between 6.5 and 8 hours. Some people sleep more than nine hours, which Wu said is not healthy either. When people don’t sleep well, their memory tends to be relatively poor, and they get anxious and easily emotional.

Visceral fat is associated with heart and metabolic diseases. A lack of sleep increases energy intake but with little change in energy consumption, causing an increase in weight, especially in visceral fat.

The University of Colorado has also conducted a number of studies on sleep, with one showing that excessive or insufficient sleep can increase the risk of heart attacks.

Researchers analyzed 461,000 participants aged 40–69 who had never had a heart attack and then followed them for seven years, finding that those who slept less than six hours were 20 percent more likely to have a heart attack, while those who slept more than nine hours were 34 percent more likely. Even among those who were non-smokers, exercised regularly, and had no genetic predisposition to cardiovascular disease, excessive or insufficient sleep still increased the risk of heart attack.

It was found that people who do not get enough sleep have lower blood levels of three physiological regulators (microRNAs) that affect vascular health, and that getting six to nine hours of sleep could offset the risk of a genetic predisposition to heart disease. Furthermore, other research found that insomnia affects the liver’s ability to produce glucose and process insulin, increasing the risk of metabolic diseases.

Too many sleepless nights can even increase the risk of Type 2 diabetes, according to a study in the American Journal of Physiology – Endocrinology and Metabolism. Researchers from Toho University Graduate School of Medicine found that the livers of sleep-deprived mice have higher blood glucose levels and fat content, both of which are associated with insulin-resistant diabetes.

Wu emphasized the importance of a good night’s sleep: it allows the cells in our dermis and subcutaneous tissues to revitalize and regenerate, so that collagen can be maintained and the skin is more elastic. The peak time for skin renewal and regeneration is around 2 a.m. to 3 a.m.

According to a report by the Chinese Sleep Research Society (CSRS), more than 300 million people in China suffer from sleep disorders, with insomnia among adults reaching 38.2 percent and more than 90 percent of primary school pupils not sleeping the required number of hours. More than three-quarters of adults go to sleep after 11 p.m. and nearly one-third stay up until after 1 a.m.

In the last two years in particular, due to the COVID-19 pandemic, people have been spending more time at home, but their overall sleep time has been reduced by two to three hours. The number of internet searches for “sleep problems” has increased by 43 percent and continues to rise.