Labs in Every State Could Have Capacity to Test for New Coronavirus by Next Week: Lab Group 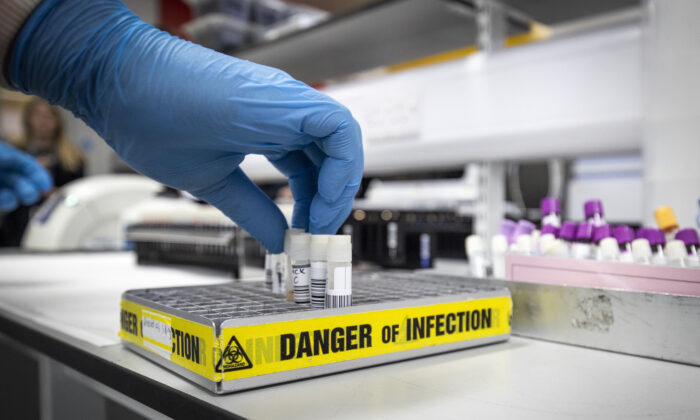 Swab samples in a coronavirus testing laboratory in Scotland in a Feb. 19, 2020. (Jane Barlow - WPA Pool/Getty Images)
By Zachary Stieber

Public health labs in every state could have the capacity to test samples for the new coronavirus in the next week, the CEO of a group that represents state and local labs said Thursday.

“Our goal is to get testing up and running in every state in the next few days or a week,” Scott Becker, CEO of the Association of Public Health Laboratories (APHL) told The Epoch Times.

Federal officials told Congress earlier in the day that an issue that plagued the rollout of local testing was finally fixed. Labs can now use some elements from the test kit they received earlier this month and will receive a remanufactured kit as soon as Friday.

The Centers for Disease Control and Prevention (CDC) and the Food and Drug Administration met with labs on Wednesday to inform them of the rejiggered test, relaying how they did studies on the test to verify that it will give a quality result, Becker said.

While Secretary of Health and Human Services Alex Azar said that 40 labs had the capacity now to test samples, Becker said it’s not like flipping a switch. The labs that are able to use the repurposed tests will now start to validate them, a process that uncovered the flaw in the original kits.

But the two-pronged solution enables labs to get back to work while waiting for the remanufactured kits and appears to solve an issue that frustrated attempts to expand testing for the new virus.

“I think we really turned the corner on the test kit issue,” Becker said.

All but a handful of labs until this week had to package samples and send them to the CDC headquarters in Atlanta, a process that added additional time even though the federal agency had no backlog of cases to test.

Out of 150 state and local public health labs in the APHL, 100 qualified under the CDC for testing for the new virus, which causes a disease called COVID-19. The same labs, which routinely provide flu testing across the nation, received the kits in early February.

While running diagnostics for the kits after they arrived, some labs uncovered an issue that caused tests to show an inconclusive result, the CDC said on Feb. 12. Officials said since then they were trying to produce an updated test but were taking the time to make sure it worked right.

Many labs were prevented from beginning to test local samples for the disease. But as of late last week, labs in four states, Nebraska, California, Illinois, and Nevada had the ability to test with the original kit.

Illinois was the first state to offer testing for the new coronavirus in-state, enabling the agency to make test results available within around 24 hours, the Illinois Department of Public Health said in a press release on Feb. 12. Scientists at the department didn’t see the test kit issues that impacted other states, the department said.

Two cases have been confirmed in the state. One patient traveled to China and the other was that patient’s spouse, who had prolonged close contact with the patient. Sixty-six tests have come back negative, including 29 tested locally, department spokeswoman Melaney Arnold said in an email. Tests for two suspected cases are pending.

The California Department of Public Health started providing limited testing for the new coronavirus as of Feb. 21, a spokeswoman told Epoch Times. “The tests are limited to people who are part of federal repatriation efforts in California and suspected of being infected,” she said. The first case of unknown origin tested positive in California this week.

A Nebraska Medicine spokesman said that the state’s public health lab did testing on 13 patients isolated at the University of Medical Center in Omaha but the CDC had to confirm those tests.

“It’s unclear if we will need CDC confirmation again for our 11 positives to be able to depart as that protocol and possible need for additional quarantine days are still being discussed,” Taylor Wilson, the spokesman, said in an emailed statement.

Further tests on the patients were planned but haven’t happened yet because their symptoms haven’t diminished to the point necessary for testing, Wilson said.

Twelve public labs, including Department of Defense labs, had the ability to test as of Tuesday, the CDC said.

The CDC still has to verify positive results as mandated by an Emergency Use Authorization but local testing enables labs to quickly rule out suspected cases.

Becker of the APHL said that he expects officials to amend the authorization at some point to remove the verification requirement but for now, labs want results to be confirmed.