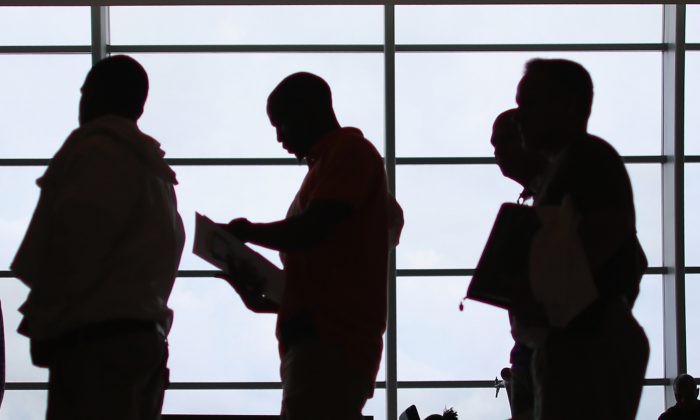 People looking for work stand in line to apply for a job during a job fair, in a file photo. (Joe Raedle/Getty Images)
Business Columnists

Labor Markets Are Fragile and Beginning to Break

The Biden administration’s main talking point against the existence of recession is the unemployment rate. Sadly, a “rate” never hired or paid anyone. In the real world, there are signs of growing strains once you disaggregate the data by income expectations, gender, and other factors. There is no shortage of jobs available in lower-wage occupations. The insecurities are at the higher end and take many forms.

The newest labor-market report reveals that job openings have fallen to the lowest level in nine months. Employer demand still outstrips willing supply in the labor market, largely due to persistent post-lockdown worker displacement. The trendline, however, does not look good. The Department of Labor doesn’t break down the data by payscale but intuitively, we all know what is happening.

The Robinhood trading app, which achieved wild fame during lockdowns, has lost customers during the bear market and the company took the dramatic step of culling 1 in 4 workers. Maybe that will be the key to making the firm profitable again but it is a sign of where things are headed. The labor force in high-end sectors with six-figure salaries is where the cuts will come in hard times. Google, Facebook, and most financial firms are talking about dramatic labor-based cost cutting in the coming months.

Sociologists have long explained that the single greatest source of life stress is the downgrading of social status. Moving from a desk job to a kitchen job, a Zoom employee to a fry cook, a manager to a person whom the boss expects to produce actual value, can cause enormous personal trauma, especially for a generation taught to believe that a college degree alone guarantees a life of Riley. And yet it is not unreasonable to forecast that this exact situation will affect many millions of workers in the coming six months.

A particularly strange situation affects women with young children. I’m seeing ever more online complaints from working mothers that there is no childcare available for them. This makes sense because the labor shortage affects such services too. They were already hard to come by due to ridiculous levels of overregulation that make it nearly impossible to open up such services legally, much less scale them to prevailing market needs.

If you think about it, child care services in a free market should be a snap. Without credentials and with a bit of passion, it’s the kind of industry anyone should be able to enter. Company growth and profitability would be based on earned reputation. But anyone attempting such an easy task today faces an amazing thicket of compliance costs if an institution can open at all. The whole sector is in crying need of massive deregulation but there is no political pressure in that direction at all.

As a result, many of the moms forced home during lockdowns have been unable to reenter the workforce due to the childcare shortage. A Wells Fargo study estimates that this shortage has left perhaps half a million families without alternatives. As a result, moms have been unable to reenter the workforce that they left during lockdowns. This problem has shattered expectations built up over the decades that families with young children can still manage to bring in two incomes even as they raise children. This supposition seems to be dying slowly. And keep in mind that the labor market for women has always been brittle and contingent on reliable services, to say nothing of schools that stay open.

Let’s look at the long sweep of women in general in the workforce since World War Two. The demographic shift has been dramatic. Whereas 87 percent of men once held full-time jobs, now only 68 percent of them do. This change is attributable to the end of youth work, prolonged adolescence due to college, early retirement, and other factors.

At the same time, whereas only 32 percent of women in 1948 held full-time jobs, mostly before and after child-bearing years, now fully 56.8 percent of them do. This is down from a year 2000 peak of 69 percent. The last time that this few women held full-time jobs was in 1988, only four years following the great shift when it was more common than not for women with children to have remunerative employment.

Champions of women’s work don’t often acknowledge this but a substantial amount of this change followed the great inflation of 1978–1981, when real household income could only be sustained by adding a paycheck to family income. For some reason, this was then regarded as some kind of emancipation when it really amounted to drafting more of the citizenry into the status of taxpayers to further fill the coffers of government.

One might inquire: just how sustainable is this? How fragile? We might be in the process of finding out as more women with pre-school and school-age children assess their options and decline to enter the rat race. As with the great inflation of the late 1970s, the current inflation will drive many of these decisions but without the option of making up the difference with a second income. We’ve been there and done that already.

That we are living in the midst of an enormous crash in real person income is obvious in the data but it is also felt by every individual and family right now. This is not just about gas prices. It’s about absolutely everything that only three years ago we imagined to constitute the good life. For a brief moment, things seemed implausibly great. Then the storm hit.

An ominous report from the New York Fed reveals precisely how a typical family today is making up the financial difference. It’s not just about product and service substitution from fancy to plain, though that much is very obvious. People are also going into debt using the most-accessible possible method: they are ballooning their credit card debt. It expanded in the second quarter by 13 percent, the largest increase in 20 years. And consider that this is happening as credit card interest charges have reached new highs averaging 16–17 percent.

Just keeping this levered-up lifestyle going will further squeeze discretionary household income, as ever more of the paycheck is allocated to debt service, taxes, and providing for basic needs. There’s no reason to wonder why hopes and dreams in the American future are not what they were: it’s all here in the data.

The Biden administration is delusional if it believes it can weather this storm with press conferences and Twitter memes. The more they claim that the situation is not that bad and in many ways improving, the less credibility these people have with the average person who is paying the terrible price for the mismanagement of the economy. They can talk about the glory of wind, sun, and bugs all they want but none of their heady nostrums can replace the good life that most people lived and expected only a few years ago.