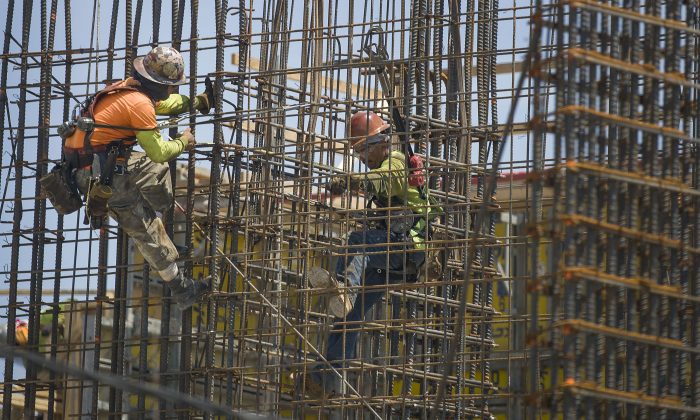 Labor Market Bounces Back With 224,000 More Jobs in June

Employers have expanded payrolls by 224,000 jobs in June, marking a surge after a weak May, the Bureau of Labor Statistics reported on July 5. Unemployment nudged up to 3.7 percent, still at nearly 50-year low.

May job growth came well below expectations at just above 70,000. The June rebound, on the other hand, handily beat the forecast of 160,000 made by economists in a Reuters poll.

The unemployment rate rise reflects an increase in the number of Americans entering the labor force—from 176,000 in May to 335,000 in June.

On a turn, Asian unemployment decreased to 2.1 percent, the lowest on record reaching back to 2003.

The Federal Reserve last month signaled it could ease monetary policy as early as this month, citing low inflation as well as growing risks to the economy from an escalation in trade tensions between Washington and Beijing.

President Donald Trump and Chinese leader Xi Jinping last week agreed to a trade truce and a return to talks.

But the Fed is still expected to go forward with the easing.

“The data are unlikely to stop the Fed from easing at this month’s meeting,” said Jim O’Sullivan, chief U.S. economist at High Frequency Economics in White Plains, New York. “The well-signaled easing reflects officials’ worries about the potential drag on growth from trade-related ‘uncertainties,’ along with sub-2 percent inflation.”

Trump on July 5 urged the Fed to lower interest rates, saying it would further boost the economy.

“We’re paying a lot of interest and it’s unnecessary, but we don’t have a Fed that knows what they’re doing so it’s one of those little things,” he told reporters before departing from the White House.

The central bank is poised to cut rates by as much as half a percentage point by the end of the year.

The trend in wage growth has slowed from late last year when wages were rising at their fastest rate in a decade, pointing to moderate inflation. Average hourly earnings rose six cents or 0.2 percent in June after gaining 0.3 percent in May. That kept the annual increase in wages at 3.1 percent in June for a second straight month.

Solid job growth over the past year has caught some economists off guard since they considered 4 percent unemployment equivalent to “full employment.”

While there still seems to be some flexibility in the job market size, there’s also the issue of quality. There were about 7.4 million job openings in April, while there were less than 6 million counted as unemployed in June. Some employers have complained they have had trouble finding qualified workers.

The administration has tried to close the skill gap, urging companies to offer training as part of a “Pledge to America’s Workers” initiative.

So far, more than 200 U.S. firms and associations have committed to provide skills development opportunities for nearly 9 million students and workers.

On June 12, executives of more than 65 foreign companies signed the pledge, committing to provide nearly 930,000 training and apprenticeship opportunities in the United States.