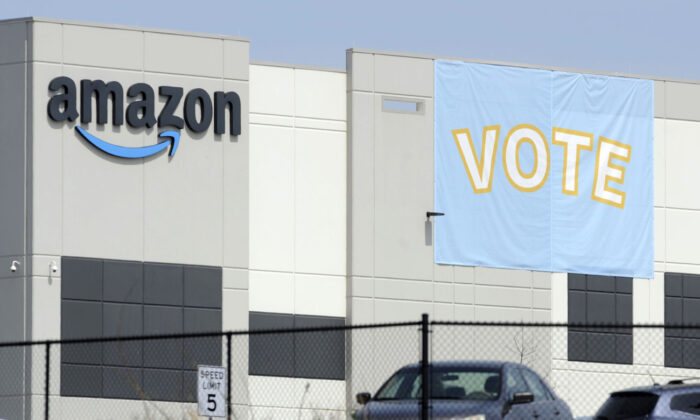 A banner encouraging workers to vote in labor balloting is shown at an Amazon warehouse in Bessemer, Alabama, on March 30, 2021. (Jay Reeves/AP Photo)
Companies

A labor board official has ordered a revote for Amazon warehouse workers in Alabama regarding forming the company’s first unionized warehouse in the United States.

The decision was issued Monday by a regional director of the National Labor Relations Board (NLRB) after an agency review found that Amazon improperly pressured warehouse staff to vote against joining a union in early February.

Workers at the Bessemer distribution center voted by mail from early February through late March on whether to join the Retail, Wholesale, and Department Store Union (RWDSU).

Of the approximately 5,867 eligible voters, 738 votes were cast for and 1,798 votes were cast against the union, while another 505 ballots were challenged. About 6,200 workers were employed at the center around the time the vote took place.

But RWDSU alleged Amazon won because it employed illegal practices, including the installation of a drop box even after the board rejected a request to have one installed.

“People should not presume that the results of this vote are in any way a validation of Amazon’s working conditions, and the way it treats its employees. Quite the contrary. The results demonstrate the powerful impact of employer intimidation and interference. We will be calling on the Labor Board to hold Amazon accountable for its egregious behavior during the campaign,” Stuart Appelbaum, president of the union, told a conference call following the vote earlier this year.

In August, an NLRB hearing officer recommended that certain objections be sustained and that a second election be directed at the fulfillment center. Amazon appealed that recommendation and insisted it did not act illegally or intimidate workers.

But in Monday’s 20-page decision giving Amazon workers at the warehouse a second chance to decide if they want to be represented by the union, the NLRB’s Region 10 Director, Lisa Henderson, agreed with the August hearing.

Much of Monday’s decision focused on Amazon’s installation of a U.S. Postal Service mailbox at the employee parking, which may have created the false impression that the company had control over the conduct of the mail ballot election.

Henderson agreed that Amazon had “interfered with employees’ exercise of a free and reasoned choice by creating the appearance of irregularity in the election procedure due to issues surrounding the installation of a mailbox outside the main entrance and by improperly polling employees’ support during mandatory meetings.”

“The employer’s flagrant disregard for the board’s typical mail-ballot procedure compromised the authority of the board and made a free and fair election impossible,” Henderson said in her decision. “By installing a postal mailbox at the main employee entrance, the employer essentially highjacked the process and gave a strong impression that it controlled the process. This dangerous and improper message to employees destroys trust in the board’s processes and in the credibility of the election results.”

On that basis, the election that commenced on Feb. 8 is set aside, and a new “secret” election ballot shall be conducted, and the manner, date, time, and place of the election will be specified in a Notice of Second Election.

Amazon is expected to appeal.

A spokesperson for the company told The Epoch Times that the decision was “disappointing,” and insisted that voters had opted not to join the union.

“Our employees have always had the choice of whether or not to join a union, and they overwhelmingly chose not to join the RWDSU earlier this year,” the spokesperson said. “As a company, we don’t think unions are the best answer for our employees. Every day we empower people to find ways to improve their jobs, and when they do that we want to make those changes—quickly. That type of continuous improvement is harder to do quickly and nimbly with unions in the middle.”

“The benefits of direct relationships between managers and employees can’t be overstated—these relationships allow every employee’s voice to be heard, not just the voices of a select few. While we’ve made great progress in important areas like pay and safety, we know there are plenty of things that we can keep doing better, both in our fulfillment centers and in our corporate offices, and that’s our focus—to work directly with our employees to keep getting better every day,” the spokesperson said.

Meanwhile, RWDSU President Appelbaum said in a statement on Monday that Amazon workers “deserve to have a voice at work, which can only come from a union.”

“Today’s decision confirms what we were saying all along—that Amazon’s intimidation and interference prevented workers from having a fair say in whether they wanted a union in their workplace—and as the Regional Director has indicated, that is both unacceptable and illegal,” Appelbaum said.