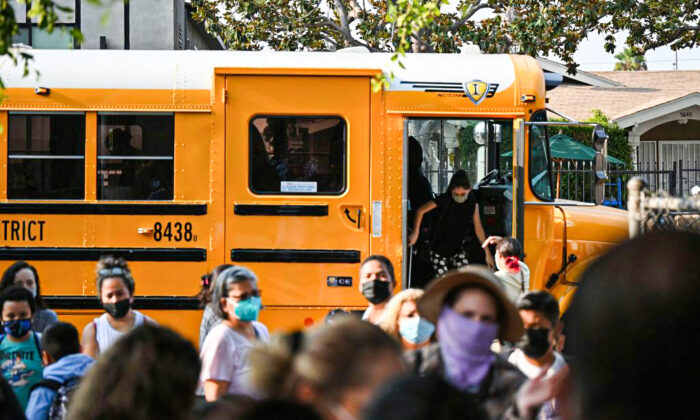 Students and parents arrive masked for the first day of the school year at Grant Elementary School in Los Angeles on Aug. 16, 2021. (Robyn Beck/AFP via Getty Images)
Southern California

Students and staff in the Los Angeles Unified School District (LAUSD) must show proof of a negative COVID-19 test before returning to campus Jan. 11 regardless of vaccination or booster status, the district announced.

“In preparation for schools reopening on January 11, and in light of the rise in COVID-19 cases due to the Omicron variant, we are making changes to our health and safety protocols,” the district said in its health guidelines updated Jan. 3.

All students and staff must upload proof of a negative COVID-19 test to the district’s DailyPass app to return to campus. External PCR tests, antigen tests, or at-home tests are accepted.

Weekly testing will continue for all students and employees through the month of January.

The school will provide two tests per student, with COVID-19 at-home rapid self-tests available for K–12 students to pick up at several locations over the weekend, according to the guidelines.

The updates came shortly after the LAUSD Board of Education held an abruptly scheduled closed-door meeting Jan. 3.

“Our goal has always been to keep kids safe and in the classroom for in-person learning,” board Vice President Nick Melvoin said after the Jan. 3 meeting.

The decision was met with backlash from some parents, who expressed frustration with the LAUSD’s safety protocols—some of the strictest among school districts in the nation.

Kristina Irwin, who has three children in LAUSD, told The Epoch Times she and other parents were concerned with the district’s handling of administering tests. Irwin is also running for LA City Council District 5.

“First they want to do a baseline test before the kids go back to school … now they want to test weekly,” Irwin said. “It’s so ridiculous. Where does it end?”

Some parents also oppose student mask mandates, saying their children are having a hard time because they can’t see their teachers’ and classmates’ faces.

“My kids can’t see their friend smiling faces unless they go over to the kids’ house for a playdate or we go to a park or somewhere where they can actually see their friends,” Irwin said. “My nine-year-old was touching his friend on the shoulder as kids normally do, and his friend freaked out, saying ‘don’t touch me, there’s coronavirus.’ And it’s really sad. These are third graders.”

Irwin said that incident showed her that “there’s some kids that have never known what it’s like to be without a mask … it’s infuriating as a mom. It breaks my heart.”

Sharon McKeeman, founder of parent advocacy group Let Them Breathe, told The Epoch Times in a previous interview that her group hears from “parents, counselors, and psychologists that students are feeling anxious and depressed because they’re not having that positive reinforcement of smiles, and they’re becoming withdrawn and antisocial.”

“We’re hearing from school administration that there’s a lot more violent and destructive behavior at school, and that the psychiatrist and counselors we’re speaking to are saying that it’s a direct result of not being able to see other human’s faces and [of] experiencing detachment,” she said.

The district also announced students will not return to campus until Jan. 11 instead of Jan. 10, declaring Jan. 10 a “Pupil-Free Day for school site employees.”

LAUSD officials described a “Pupil-Free Day” as a day for faculty and staff training, meetings, and planning for the upcoming semester in a Dec. 2020 letter.

“For the Pupil-Free Day … there shall be three hours of District-sponsored professional development to start the day, followed by a one-hour faculty meeting. The remainder of the Pupil-Free Day shall be used by UTLA-represented employees for planning at their discretion,” the letter read.

A spokesperson for the LAUSD was not immediately available for comment.