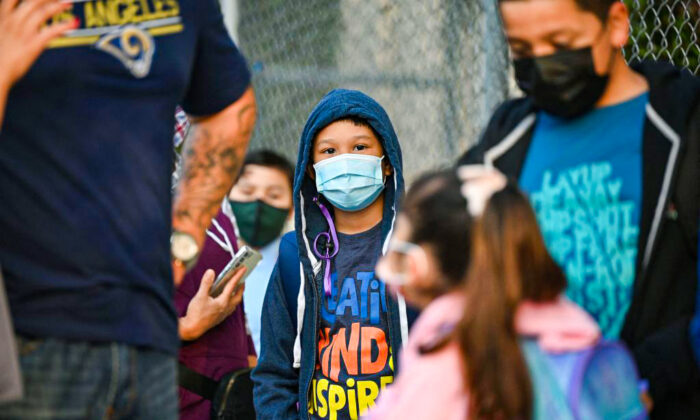 The Los Angeles Unified School District (LAUSD) will scale back most of its COVID-19 measures—including the mask mandate and weekly testing—for the upcoming school year.

The LAUSD announced these changes just two weeks before the start of the fall semester on Aug 15.

“As we have entered into a new phase of this virus where we have accessible at-home testing, vaccinations for COVID-19 and therapeutics available for treatment, Los Angeles Unified is able to nimbly adjust to changing conditions,” the district stated in an Aug. 2 statement.

Under the new guidelines, indoor masking is “strongly recommended” but not required, and the COVID-19 vaccine mandate for students is on hold until at least 2023.

Students and staff will no longer have to undergo weekly COVID-19 testing—though everyone must upload a negative test result to the district’s DailyPass mobile application before returning to campus.

Instead of weekly testing, the district is only requiring those who are experiencing COVID-19 symptoms—or who have been in close contact with a person who has tested positive—to test for the coronavirus.

Students or staff members who test positive will be required to isolate themselves at home for at least five days. They can leave isolation on day six if their symptoms are improving, they test negative for the virus, and they remain fever-free for 24 hours.

Employees who leave isolation after the five-day period will be required to wear a mask on campus until 10 days after the initial positive test. As for students, this practice is “strongly recommended.”

The new testing rules are aligned with Superintendent Alberto Carvalho’s strategic plan for the district to cut its spending.

He said in June that he was preparing the district—which received about $5 billion in federal pandemic aid last year—for the time when such funding is no longer available.

During the 2021–22 school year, the district administered between 1 and 2 million tests each month, which, along with contact tracing, was projected to cost nearly $600 million each year, according to a district analysis in February (pdf). The cost was four times the cost projections from June 2021. The majority of such COVID-19 expenses will likely be covered by federal funding, officials said.

Some parents and educators are worried that the lack of masking can lead to a transmission surge in schools, while the changes are welcomed by those who argued that masks hindered students’ ability to learn and socialize.

“Parents and students standing up for their rights are returning common sense to the equation in education,” she told The Epoch Times. “However, we must remain vigilant so that overreaching restrictions do not return. Students can’t be on a roller coaster this year as they need to heal and recoup from learning loss.”

The founder of parent advocacy group UTLA Uncensored, who declined to provide her name out of concerns for her children’s safety, said she hopes all COVID-19 measures will soon be laid to rest.

“This is a win for kids,” the mother of two LAUSD students told The Epoch Times. “Parents are hopeful that these changes will allow kids to heal from the trauma of the past two years.”