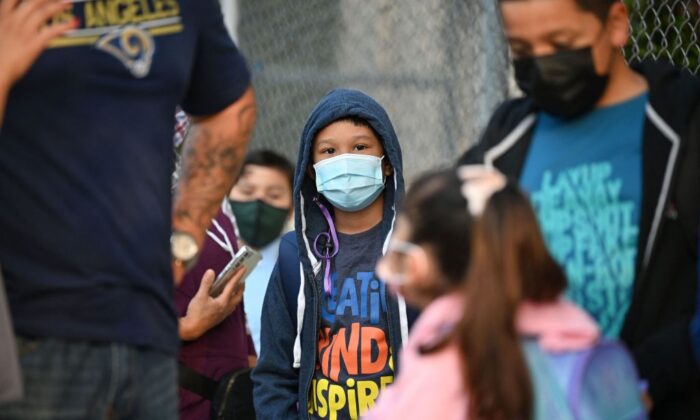 Lisa Sanchez, whose daughter is in LAUSD, called the situation a “never-ending battle.”

“We’re very upset that the school hasn’t lifted the mandate sooner,” Sanchez told The Epoch Times. “District officials claim to follow the science—yet the science has spoken—and here our kids are still masked.”

Sanchez said she has grown frustrated with the way the teacher’s union is using masks as “bargaining chips” to negotiate their own benefits.

“Our children’s health is being used as bargaining chips for political gain,” Sanchez said. “We are the parents, and we want to see choice all the way around. There’s nothing to be lost in engaging in choice—choice is a win-win. Then everyone’s protected if they feel the need to be protected, and if other if people feel like they believe in natural immunity, we should be given a choice to opt-out.”

Angelita Rovero, a former LAUSD teacher who has two children in the district’s schools, echoed these thoughts regarding the teachers’ union.

“The union is basically running the school board,” Rovero told The Epoch Times. “And they’re putting the kids last. It’s not even about our kids—it’s about whatever agreements they are making for their benefits.”

Though either party can request to meet and bargain over potential changes to the mask requirement, any negotiations would likely come at a high cost for LAUSD.

However, some parents say the continued medical mandates may eventually cost LAUSD enrollment.

Some parents—including both Sanchez and Rovero, respectively—said that they would leave the district if LAUSD continues with its plan to enforce a student COVID-19 vaccine mandate at the beginning of the 2022–23 school year. As of December 2021, an estimated 34,000 students were unvaccinated.

Sanchez said parents considering leaving the district are looking into getting permits for their children to attend schools in neighboring districts.

“A major point here is when we pull our kids out all these teachers that have been fighting to keep these mandates and all this stuff, they’re not going to have jobs,” Sanchez said.

Oksana Sandler, who has two children in LAUSD, told The Epoch Times she would move her children to a neighboring school district if the vaccine mandate were enforced in the LAUSD in the fall.

“As a mother, the health and well-being of my children is utmost importance,” Sandler said. “And they don’t feel safe, calm or peaceful in the LAUSD—and I’m not putting them through the same things they went through since September.”

Sandler also pointed out two bills recently introduced in the state legislature—Proposition 866, which would allow children over 12 to “make choices about their bodies around reproductive healthcare” without notifying parents, and Proposition 871, which would add COVID-19 vaccinations to the state’s list of required inoculations for attending K-12 schools.

Sandler said if the bills get passed, she will consider moving her family out of the state.

This comes as LAUSD officials projected enrollment would begin to drop by about 4 percent each year over the next decade—reaching below 400,000 in just two years.

A spokesperson for the LAUSD, as well as UTLA, did not respond to a request for comment by press deadline.