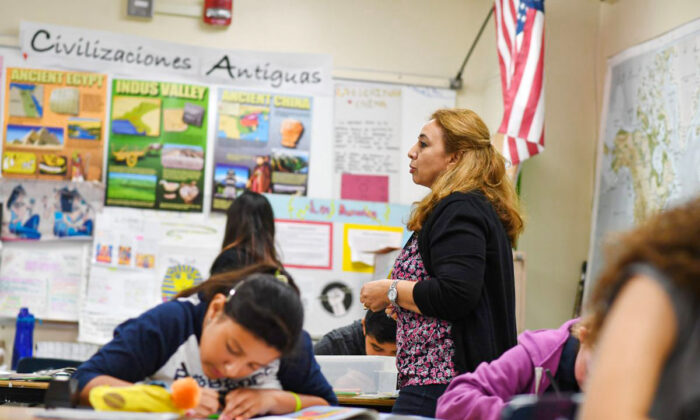 A teacher teaches a history lesson in Spanish in a Dual Language Academy class at Franklin High School in Los Angeles, on May 25, 2017. (Robyn Beck/AFP/Getty Images)
Southern California

A union representing teachers in the Los Angeles Unified School District (LAUSD) filed an unfair practice charge on Aug. 8 against the district for adding four optional days to the 2022–2023 school year.

The district’s school board approved in April the extension to help students who are still catching up on learning while emerging from the COVID-19 pandemic.

The United Teachers of Los Angeles (UTLA) said in a statement that the LAUSD violated the Educational Employment Relations Act because the district announced the extra days without notifying the union or providing an opportunity for its members to negotiate when making significant changes to employee calendars.

“The district has overstepped legal boundaries by failing to include the tens of thousands of teachers, nurses, counselors, and support staff in determining the best way for the LAUSD community to manage post-COVID recovery,” the statement read.

UTLA President Cecily Myart-Cruz called for the district to withdraw the extra days and negotiate with the union “with good faith” in an Aug. 10 statement.

“Educators are the ones in the classroom day to day, not Superintendent Carvalho, yet they are being left out of conversations on how to most effectively invest in student learning,” Myart-Cruz stated.

UTLA stated that the $122 million could be better spent on hiring new school counselors, social workers, and psychologists and investing in student learning programs and teacher development.

According to an LAUSD statement emailed to The Epoch Times, the optional days are only for students who need more instruction, and teachers who choose to participate will receive additional pay.

The district has met with the union to discuss work and academic calendars and will keep the conversation going, officials said.

Adding optional instruction days was the best use of the district’s additional state and federal funding this year, Superintendent Alberto Carvalho said during an April 26 board meeting.

He said because the funding is not permanent it cannot be used to hire additional staff as the union suggested.

UTLA’s complaint will be reviewed by a California Public Employment Relations Board agent to determine whether the district violated a statute.

If there’s a violation, the board will help the two sides reach an agreement—or a settlement—through an informal meeting.

Last year, the union negotiated with the district to extend COVID-19 measures at schools such as continued testing and masking, as well as receiving a five percent pay raise and other benefits for its members.