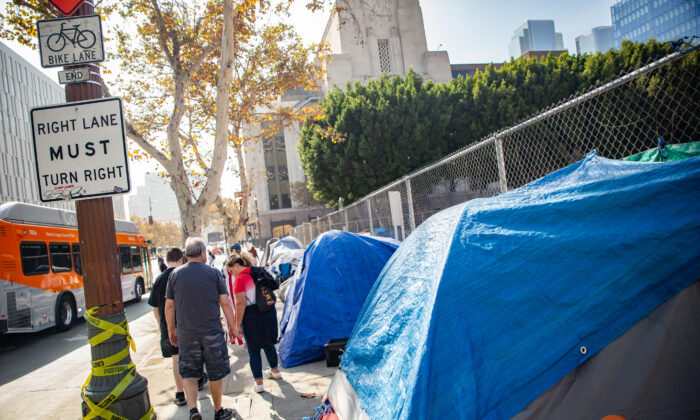 On Dec. 23, Councilman Mitch O’Farrell’s office put up flyers around the neighborhood warning encampment residents of a “notice of major cleaning” on Dec. 28 followed by a full encampment clearing on Jan. 5.

Los Angeles Sanitation began cleaning up one of Koreatown’s largest encampments at Shatto Park on Dec. 28.

Earlier this year, Los Angeles Mayor Eric Garcetti and the city council passed Ordinance 41.18, which prohibits encampments in public areas. However, enforcement of the ban in a district requires a motion to be introduced by a district councilmember and approved by the council.

Before the motion’s approval, many Koreatown residents expressed support for the enforcement, saying they felt unsafe in their neighborhoods due to an increase in crime.

Resident Karen LaCroix, who participates in the Las Palmas Senior Center, said in a written comment (pdf) to the city council on Oct. 27 that she can’t safely walk to the center due to large tents in her way.

“I cannot use the sidewalk because the encampment prevents me from walking safely to Las Palmas,” LaCroix said. “I have to walk in the street to go around the encampment and it is unsafe for me.”

Another resident, who gave her name as Denise, said the area has suffered break-ins of buildings and cars “due to the encampments” on Shatto, Westmoreland, and 4th Street.

“Our mailman even got assaulted,” she said. “I no longer feel safe going on a run or enjoying walks with my dog like I did just a couple years ago.”

However, the motion was also met with some pushback from residents who say moving encampments out of the area won’t help the homeless in the long term.

Maggie Lange, a resident of Koreatown who shops near Shatto Park, voiced her opposition to the encampment ban in a written comment to the city council on Oct. 27.

“Designating this area as an enforcement zone under 41.18 will not help residents of the encampment into housing that respects human dignity,” Lange said. “There is simply insufficient publicly available housing in the city of Los Angeles at this time.”

Lange went on to remark that the result of the Echo Park displacement several months ago reflects her concern that only a small number of people displaced from the park ended up in supportive permanent housing.

In addition, Koreatown will no longer be under O’Farrell’s CD13 after Jan. 1 due to redistricting.

After the New Year, Koreatown will be united under CD10; however, CD10 is currently without leadership as former Councilman Mark Ridley-Thomas was suspended in October on federal charges of bribery and fraud.

This may lead to oversight when it comes to housing displaced homeless people after the Jan. 5 cleanup.

For this reason, some neighborhood activists criticized O’Farrell’s decision to enforce the encampment ban now.

Neighborhood activist group K-Town for All also criticized the timing of the enforcement, saying it is poorly timed due to a spike in COVID-19 cases across the state. In addition, the group said, shelter capacity is limited due to pandemic safety distancing protocols.

In the coming year, however, Koreatown will see more available temporary and permanent housing for unhoused Angelenos.

The building is expected to be six stories and 500,000 square feet, with 93 studio apartments and two manager’s units, according to a project description. About half of the units are to be reserved for permanent supportive homeless housing, and the other half for low-income tenants.