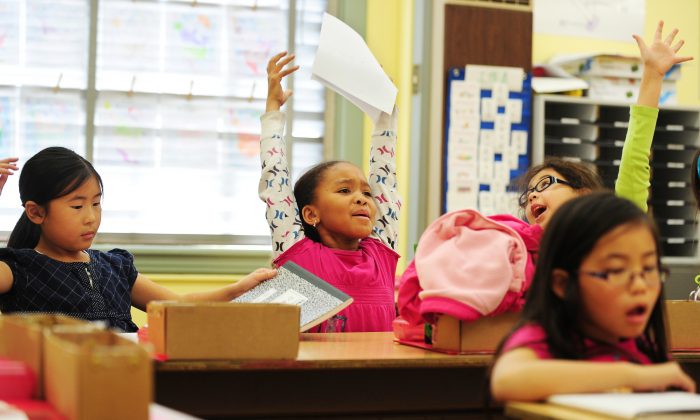 LA Schools to Lose Funding for Having 30 Percent White Students

Outdated desegregation requirements based on racial quotas 'aren't very helpful' in many of today's schools, says expert
By Sarah Le

LOS ANGELES—A ’70s-era desegregation plan is being questioned as some schools in Los Angeles face cuts in funding because they reached more than 30 percent white students.

Eight schools are set to lose funding, including for teaching positions—consequently increasing class sizes. The schools affected include five elementary schools, two middle schools, and a high school; all situated in some of the more ethnically diverse areas of the city.

The desegregation plan—approved by the courts in 1978—was designed to address the “harms of racial isolation,” said Shannon Haber, spokesperson for the Los Angeles Unified School District.

To attempt to offset these harms, the program gives extra funding to schools with more than 70 percent “non-white” students and labeled as Predominantly Hispanic, Black, Asian, or Other Non-Anglo (PHBAO).

However, if the number of white students in the school rises to more than 30 percent, the school is considered successfully “integrated” and loses the extra funding.

Nobody knows how much [it’s helping]. It’s not really monitored by anyone.
— Gary Orfield, professor, UCLA Graduate School of Education

Only 12 percent of the district’s more than 1,300 schools are considered integrated after nearly 40 years under the desegregation plan.

Gary Orfield, professor at the UCLA Graduate School of Education, has served as an expert witness in several dozen court cases, including the Los Angeles Superior Court case in the 1970s that led to the adoption of the desegregation plan. He said the plan was limited and has not proved very productive.

“Nobody knows how much [it’s helping]. It’s not really monitored by anyone,” he said. “I think we could draw up a better plan in an hour.”

According to district demographics, only 10 percent of all Los Angeles Unified School District students are white, raising questions about how many schools can actually reach the required 70-to-30 ratio. Census data from 2015 shows that Los Angeles itself is 28 percent white.

A school’s PHBAO designation is based on an Ethnic Survey Report filled out by parents. Letters were mailed to inform the parents of students at the eight schools about the funding cuts and that families are allowed to “review their self-identified ethnicity.”

Haber said Los Angeles school districts are required to work toward desegregation as long as they exist.

Professor of education at UCLA, Pedro Noguera, said the desegregation plan is often not useful anymore.

“These are old desegregation plans that aimed to achieve some degree of racial balance,” he said. “In a lot of places, we recognize that race is much more complicated than that now, and that those kinds of racial quotas a lot of times aren’t very helpful.”

Orfield said he met with the school district board about a year ago to discuss improving the desegregation plan.

“They were all very interested, but they haven’t done much yet,” he said. Orfield supports a plan adopted by Berkeley in 1995 that has been reportedly successful at maintaining diversity and increasing enrollment. The system allows parents to rank schools out of three choices provided by an algorithm. The vast majority are granted their first or second choice.

“This whole situation in Los Angeles needs a good review,” said Orfield. “There are places in Los Angeles where there could be a lot of integration. There’s other places where it would be almost impossible.”

Research shows that students who attend integrated schools have higher test scores, are more likely to enroll in college, and are less likely to drop out.