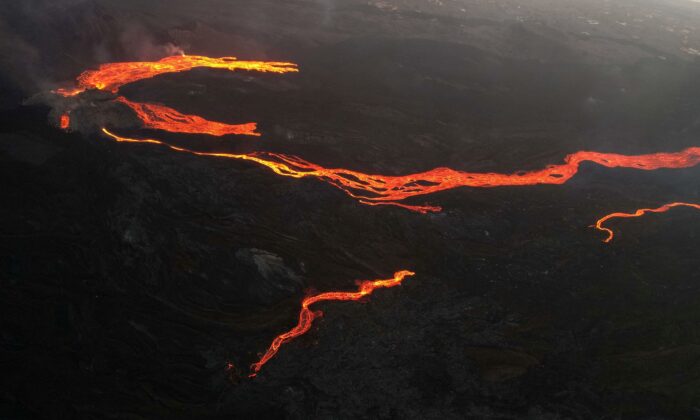 An aerial view of the lava from the Cumbre Vieja volcano near Tacande neighborhood, on the Canary Island of La Palma, Spain, on Dec. 13, 2021. (Borja Suarez/Reuters)
Science News

La Palma Volcano’s Tremors Stop, but Eruption May Not Be at an End

LA PALMA—The Cumbre Vieja volcano on the Canary Island of La Palma fell silent as constant tremors stopped late on Monday, though experts cautioned this didn’t necessarily mean the eruption was nearing an end after 85 days.

Seismic activity on the island all but stopped around 9 p.m. local time on Monday, The Canary Islands Volcanology Institute, Involcan, said on Tuesday. It’s the longest period without tremors since the eruption began.

“This does not imply the eruption is ending, since on other occasions halts were followed by a renewed increase in activity,” Involcan said on its Twitter account.

It posted footage of the Cumbre Vieja showing that the almost constant roaring of the volcano had ceased.

The eruption, which has sent rivers of molten lava running down the slopes of Cumbre Vieja for weeks, is the longest-running on the Spanish Canary Island since records began in 1500.

The quiet on Monday evening and Tuesday morning followed the emission of dense toxic clouds of sulfur dioxide on Monday morning that prompted the lockdown of about a third of the island’s population.

Since the eruption began on Sep. 19, thousands of people have been evacuated, at least 2,910 buildings have been destroyed, and the main livelihood of the island, banana plantations, has been devastated.

Stavros Meletlidis, a volcanologist with the National Geographic Institute who has been following the eruption since it began, said there were multiple possible explanations and pointed out that pauses had been observed before.

Around a week after the eruption started, seismic activity suddenly dropped off for several hours before restarting with renewed vigor, a pattern that is not uncommon in the early stages of an eruption, he explained.

But after nearly three months of activity, the eruption is in a different phase and could be losing strength, he said.

“The magma needs the energy to get to the surface and it seems that it does not have it at the moment,” he said, explaining that could be due to a decline in levels of gases or magma volume as the eruption slowly loses force.

However, it could be the result of a blockage between subterranean magma chambers and the surface vent, in which case pressure would continue to build up until reaching critical mass and causing fresh explosions.

“It’s too early to tell if we’re entering a terminal phase,” he said.

Before declaring the eruption definitively over, scientists will be looking out for a period of at least 48 hours with no seismic activity or surface eruption, he said.