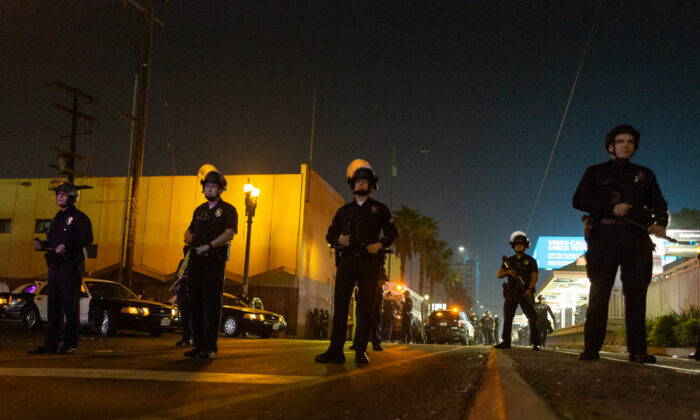 LA Officer Beaten With Own Baton During Pro-Abortion Protest: Police

A Los Angeles Police Department (LAPD) officer remains hospitalized after he was beaten with his own baton while responding to an abortion-rights protest near the federal courthouse last week, according to LAPD Assistant Chief Dominic Choi.

The protest started when about 200 people gathered in front of the federal building in downtown Los Angeles on May 3—one day after the publication of a leaked draft of a U.S. Supreme Court decision that indicated the court was poised to overturn the landmark 1973 Roe v. Wade decision.

Officers with the Department of Homeland Security drove through the group of protestors when their vehicle was surrounded, Choi said.

Those officers called for help and more homeland security officers responded, but they were also surrounded by the crowd. Protestors started throwing rocks and bottles at officers, according to LAPD social media posts from that night.

“These individuals started to vandalize these police cars and then a help call went out and that’s when LAPD responded,” Choi said.

One of the first LAPD officers to respond was injured after he left his vehicle. The crowd surrounded the officer and one of the protestors removed his baton and struck him with it, injuring him, according to police.

The officer recovered his baton but the suspects fled the area, he said.

LAPD communications officers told The Epoch Times they did not have information about the officer’s injuries or condition.

The LAPD sent more officers to the scene and declared the event an unlawful assembly before they dispersed the group, Choi said.

No arrests were made during the incident. Officers are investigating the use of batons by the group, Choi said.

Members of the group reportedly vandalized property in some local areas and they spray-painted sidewalks and walls, he said.

The incident was the only violence or criminal behavior that officers have seen during the four abortion-rights protests last week, Choi said.

“Our plan is always to facilitate these demonstrations, these protests,” Choi said. “In this particular case, we didn’t anticipate another agency driving through this group. We did have to come to their aid. We had to do what we needed to do to resolve this as beautifully as we could.”