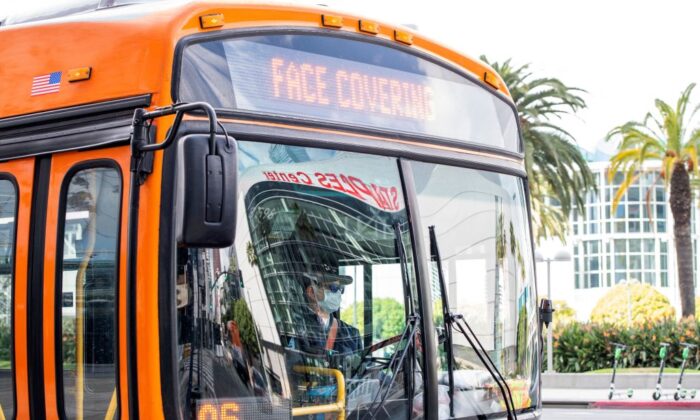 A man wearing a face mask drives a bus with a sign in the downtown area in Los Angeles on March 8, 2021. (Valerie Macon/AFP via Getty Images)
Southern California

LOS ANGELES—Los Angeles County’s Metropolitan Transportation Authority will cut its bus services by 10 percent and reduce rail line frequency because Metro is struggling to find enough bus and rail operators to meet the demand of its 740,000 daily users.

“We’re currently facing a crisis both for our customers and for our employees,” Chief Operations Officer Conan Cheung said during a Jan. 27 board meeting.

The Metro board approved the temporary service cutback, which will begin on Feb. 20, and directed Chief Executive Stephanie Wiggins to come back in 30 days with a plan to return to standard bus service by June.

Wiggins, however, told the board not to count on a full return by then.

“I’m here to tell you that, today, the goal is not a guarantee,” Wiggins said.

In a presentation during the meeting, Metro officials said the operator shortage may be the Metro’s “single biggest issue,” attributing the agency’s struggles to a “perfect storm” that includes a national labor shortage, attrition greater than hiring, and COVID-19 infections among drivers.

The Metro, which has about 120 bus lines, currently employs about 3,400 bus and rail operators—but needs an additional 586 operators to cover all routes.

“At 5 in the morning, you’re struggling to find people to come in to cover canceled assignments,” Cheung said. “We’re not canceling those because we want to cancel those.”

During the early months of the COVID-19 pandemic, the Metro cut its bus service by 20 percent and issued a hiring freeze on new part-time bus drivers to avoid layoffs.

In May 2021, however, the Metro announced its plan to hire about 800 more bus drivers.

Wiggins was also instructed to report back to the board in 60 days with recommendations for improving operator retention.

Meanwhile, the board has several strategies aimed at improving operator retention, including sign-on bonuses, weekend rewards, and referrals.

The agency will also work with labor unions to bring in full-time operators and will launch a six-month program in February that starts new hires at $17.75 per hour and increases pay to $19.12 per hour by the end of the program.

In September, the board voted to launch a 23-month free pilot program for K–12 students; this month, the agency ended its free fare program launched during the pandemic.

A spokesperson for the Metro agency didn’t respond to a request for comment by press deadline.