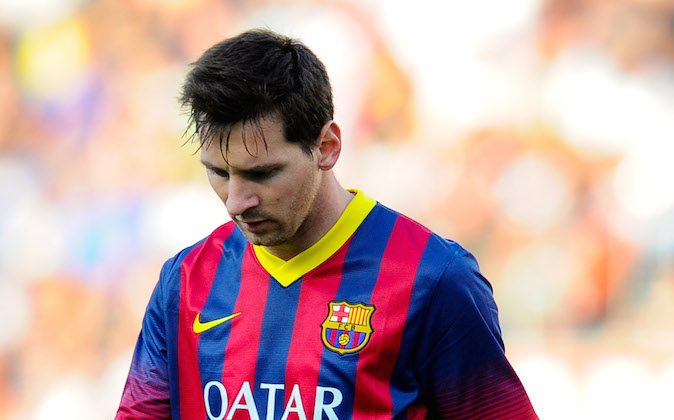 Lionel Messi of FC Barcelona looks down during the La Liga match between Elche FC and FC Barcelona at Estadio Manuel Martinez Valero on May 11, 2014 in Elche, Spain. (Photo by David Ramos/Getty Images)
Soccer

MADRID— Atletico Madrid and Barcelona set up a winner-takes-all decider for the Spanish league title after both teams drew on Sunday, while Real Madrid lost to see its slim title hopes end.

Though Malaga finished with 10 men, Atletico failed to score a winner that would have secured a first league title in 18 years after Elche held Barcelona 0-0.

Instead, Atletico travels to the Camp Nou next weekend for a dramatic finale to decide the champion.

Atletico leads with 89 points, three better than Barcelona, which means a draw will be enough to pry the championship away from the defending champion, which must win to retain its title.

“We still believe in this team. We’re Atletico and we’re going to go there to win,” Atletico captain Gabi Fernandez said. “We’re used to playing in finals.”

Madrid, which has 84 points, limped out of the league race following a poor showing in Vigo, where a pair of turnovers allowed Charles to score both goals in a 2-0 win.

Madrid faces Atletico in the Champions League final and played as if it was already looking ahead to Lisbon as defensive mistakes by Sergio Ramos and Xabi Alonso allowed Charles to net easily in each half. Cristiano Ronaldo was sidelined with an injury and Gareth Bale was on the bench, while Sami Khedira and Alvaro Arbeloa returned from long injuries to play.

Raul Garcia headed well wide with only Willy Caballero to beat, and the Malaga ‘keeper made key stops from Villa and substitute Diego Ribas after the break.

Thibaut Courtois rushed out to cut off Roque Santa Cruz’s solo effort on the hour mark, but the Atletico goalkeeper’s mix-up with defender Miranda allowed Samuel Garcia to get free to head home the opener.

With nerves starting to creep in, Alderweireld — filling in for the suspended Diego Godin — leapt high to head home a corner that allowed home fans to exhale.

“It’s going to be an important game for the club,” Atletico coach Diego Simeone said. “We’ve reached the last round three points above Barcelona — nobody would have believed we had a chance to win, but here we are, alive still.”

Barcelona, which counted itself out of the title race only eight days ago, came out at Elche with intention but eventually seemed to settle for its result when word of Malaga’s first goal arrived.

Andres Iniesta volleyed a shot off the crossbar early on before goalkeeper Manu Herrera got a touch to Lionel Messi’s effort in the 38th to tip it around the far post. Herrera denied Messi again after the restart, but the defending champions barely threatened again.

“It’s going to be a great week ahead and for some of us it could be our last game with Barca so it would be a nice way to go out,” Barcelona defender Javier Mascherano said.

Atletico hasn’t lost to Barcelona this season, drawing in four matches before finally beating the Catalans in the second leg of the Champions League quarterfinals.

Two teams will join Real Betis in being relegated to the second division on the last day after Almeria and Getafe secured victories to improve their chances of staying up. Real Valladolid allowed Betis to rally back three times before eventually losing 4-3 to the last-place club.

Granada has 38 points ahead of its finale at Valladolid, which is tied on 36 points with Osasuna in the final two drop places. Osasuna drew 1-1 at Espanyol.

Athletic Bilbao and Real Sociedad drew 1-1 in a Basque derby.