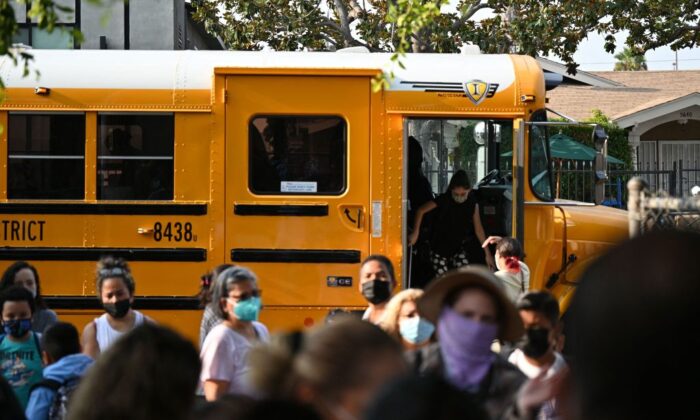 Students and parents arrive masked for the first day of the school year at Grant Elementary School in Los Angeles on Aug. 16, 2021. (Robyn Beck/AFP via Getty Images)
Vaccines & Safety

Two officials at one of the largest hospital systems in Los Angeles and Southern California dismissed government officials’ statements about another wave of COVID-19 hitting the region and the United States as “media hype.”

But in a recent news conference on July 13, Brad Spellberg, the chief medical officer of Los Angeles County and University of Southern California Medical Center, and epidemiologist Paul Holtom, said that there have been no changes in the transmission levels of COVID-19.

“The numbers at [the hospital system’s] COVID-positive tests have continued to go up, but this isn’t because we’re seeing a ton of people with symptomatic disease being admitted … we’re seeing a lot of people with mild disease in urgent care and [emergency department] who go home and do not get admitted,” he said.

Regarding whether there is a high number of COVID-19 patients admitted to the ICU, he added that the hospital officials “haven’t seen one of those since February. It’s been months.”

“It is just not the same pandemic that it was, despite all the media hype to the contrary… I mean … a lot of people have bad colds is what we’re seeing,” Spellberg added.

Holtom, meanwhile, stated that “we’re just seeing nobody with severe” symptoms of COVID-19.

“As of this morning, we have no one in the hospital who had pulmonary disease due to COVID. Nobody in the hospital … Nobody. Nobody who had COVID-19 disease as we would see it in the past. So I guess it is hard to get a little more excited,” he continued.

On July 14, Ferrer said that LA County will likely reimpose a mask mandate on July 29.

“As of today, we have moved from the medium to the ‘high’ COVID community level,” she said at a briefing. “If the county remains in the CDC-designated High level for two consecutive weeks, we will again impose a universal mandatory indoor mask-wearing mandate.