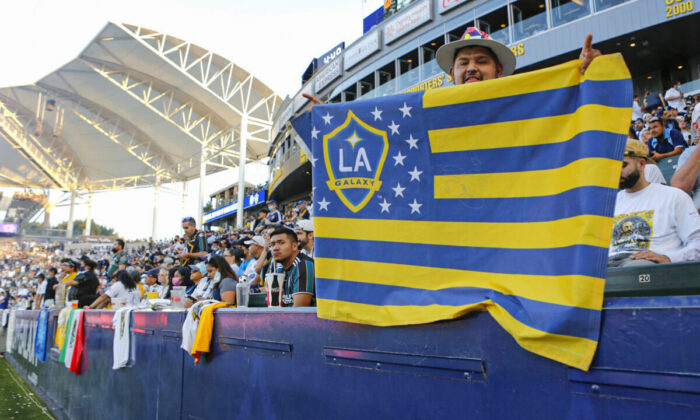 A Los Angeles Galaxy fan holds up a flag during a game against Los Angeles FC at Dignity Health Sports Park, in Carson, Calif., on October 3, 2021. (Katharine Lotze/Getty Images)
Soccer

In the latest “El Tráfico” matchup for the Lamar Hunt U.S. Open Cup’s Round of 16, the L.A. Galaxy won a dominant victory over their downtown rival LAFC, 3–1, in front of over 24,000 fans on Wednesday night at the Galaxy’s Dignity Health Sports Park.

LAFC currently leads the MLS Western Division over fifth place Galaxy by six points with a record of 8–3–2.

Following two horrific home losses, Galaxy Head coach Greg Vanney said, “The response of our guys was not just about LAFC, it was about losing two games back-to-back on our field, 3–1 and 3–0.”

“The team on the other side happened to be LAFC, which is a rivalry, which also obviously adds a little bit of spice to the game,” added Vanney. “But our guys, I challenged them after the last game, they challenged each other and themselves, that they couldn’t play in the LA Galaxy stadium and field the way we lost the [previous] games.”

Though LAFC had a slight advantage in ball possession of 54 percent, the Galaxy dominated with three goals and 17 shots, nine on goal, while LAFC attempted 10 shots, scoring on their sole attempt on goal in the closing minutes.

“The competitive spirit, the energy, the speed at which we were moving and playing, set the tone for the game,” concluded Vanney. “We stayed organized, we stay connected, everybody played on both sides of the ball, with it and without it.”

Galaxy right midfielder Kevin Cabral opened the scoring in the 51st minute from an assist by Samuel Grandsir with a cross to a sliding Cabral on the right side of the six-yard box, placing the ball perfectly into the lower left side of the goal, beating goalie Maxime Crepeau.

The lead doubled shortly after in the 57th minute on a counter attack as Grandsir added another assist with a perfectly place cross around a defender, finding Javier “Chicharito” Hernandez, who slid to punch a left-footed shot in the lower right side of the goal.

The game was a blowout with a 3–0 advantage in the 81st minute following a cross to the left side to Cabral. He made a timely back-heel to an oncoming Dejan Jovelic, who shot a low blast into the right corner for his third U.S. Open Cup goal.

“It’s the most complete in two years, since I’ve been here. In terms of duels, in terms of competition, in terms of playing every play, staying connected as a group, having everybody play on both sides of the ball every play, finishing our chances for the most part,” concluded Vanney.

LAFC would get a consolation goal in the 85th minute from Jose Cifuentes’ cross on the left to an open Cristian Arango near the center of the six yard box, for a header to the right past Galaxy goalie Jonathan Klinsmann, for his fourth goal in the Open Cup.

LAFC superstar, Carlos Vela, had little impact in the match since he was substituted early due to a hamstring issue.

“Today I think [the Galaxy] fought more, played a better game, and deserved to win,” said Vela. “We are let down as a team by the way we played and lost.”

LAFC coach Steve Cherundolo stated after the game, “What’s important is how players deal with losses and how they learn from their mistakes, and improve on that, and as a collective, as a group become better.”

“It’s been a difficult stretch,” added Cherundolo, “Very congested schedule with a thin roster due to injuries, and the guys, their effort before the game and during training and actually stringing some results together.”

The Galaxy will next host Austin on Sunday, 5/29/22, at 6:00 p.m. PT. In the US Open Cup, they will meet USL team Sacramento Republic in the quarterfinals on June 21—who upset the San Jose Earthquake in the Round of 16.