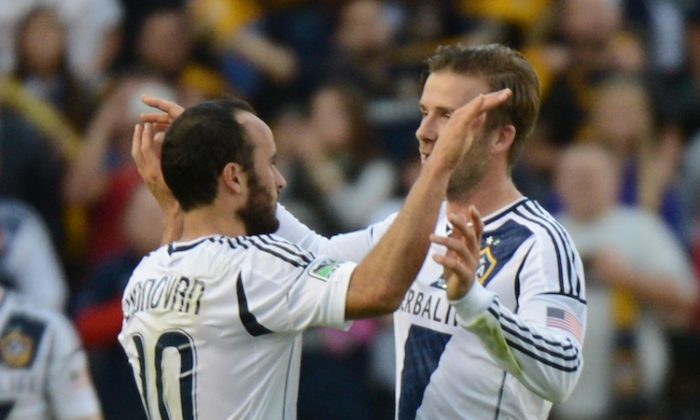 CARSON, Calif.—The Los Angeles Galaxy became four-time MLS Cup champions with a 3–1 win over the Houston Dynamo at Home Depot Center on Saturday spurred by dramatic turnaround early in the second half.

The Galaxy scored two goals in five minutes and tacked on a third in stoppage time to overcome a one-goal deficit that Houston had gained at the end of the first half.

David Beckham, 37, playing in his final game for the Galaxy, delivered another top-notch performance. His energetic display on all parts of the pitch reinvigorated his teammates and he also played an important role in the Galaxy’s first two goals.

“We came good when it was the important time,” Beckham said in his postgame press conference. “It’s very special, today’s a good day.”

Landon Donovan, 30, scored the game-winning goal for LA, just as he did in last year’s final. His own future has been up in the air as he looks to take some time away from the game.

“It’s a little surreal, to be honest,” Donovan said about the feeling of winning a championship.

The Houston Dynamo came into this MLS Cup final a stronger team than last year with Brad Davis and Honduran winger Boniek Garcia in the squad.

Houston started brightly, but LA found their feet and came up with a rapid counterattack leading to Robbie Keane finding Donovan who missed the open net just to the left of Tally Hall in the 13th minute.

It was an uncharacteristic miss by Donovan who has now scored 22 MLS postseason goals. “You feel like you let the team down. It sat with me till halftime,” Donovan said after the match.

Calen Carr gave Houston the lead with a well-taken shot up high that left Josh Saunders in the Galaxy goal helpless. The Dynamo striker took a nice feed from Adam Moffatt and raced down the right flank to disappoint the boisterous LA crowd.

It was a goal slightly against the run of play that left Houston with a one-goal lead right before halftime.

The game turned with a couple of key events early in the second half that led to a Galaxy resurgence.

In the 56th minute, Saunders came up with a crucial diving save to his left from a Carr header. Carr nearly put the Dynamo up by two goals but just three minutes later, he was subbed off due to a left knee injury.

The Galaxy dialed up the pressure on Houston urged on by the home support from the HDC. Having the home crowd at their back was a result in the change in playoff format that saw the team with more points in the final hosting the championship.

Interestingly, with the MLS’s latest iteration of playoffs format, the final matchup between the Dynamo and Galaxy featured a meeting of the lowest combined seeds to ever qualify for a title game (Dynamo No. 5 in East, Galaxy No. 4 in West). Nevertheless, in Friday’s press conference, LA head coach Bruce Arena said the “best two teams survived.”

On the hour mark, towering central defender Omar Gonzalez, who was named MVP, headed a Juninho cross for the equalizer. Beckham had recovered his own corner and found Juninho on the right to set up Gonzalez.

With the HDC crowd back in full voice, just five minutes later a Beckham free kick from a central position ignited a mad scramble in the Dynamo box. In the melee, a penalty was called for handball against Houston and Donovan stepped up and slotted it low to Hall’s left.

Defending a lead is something the Galaxy do very well and this MLS Cup was no exception. Houston came up with a couple of hopeful long-range efforts and a fairly routine header but did not trouble Saunders.

Beckham displayed once again his furious competitiveness. His effort was seen in all parts of the pitch—making a crucial tackle on Boniek Garcia near his own goal line and also finding himself near the Houston goal line getting on the end of a cross.

Los Angeles is a terrific counterattacking team and, in stoppage time, Keane found himself one-on-one with Hall. He rounded Hall who hauled him down resulting in a penalty.

Keane took the penalty himself and made it 3–1.

Gonzalez’s strong performance in the air was instrumental in the Galaxy comeback and his defensive work shut helped shut down Houston’s leading playoff goalscorer Will Bruin.

“I just got to be dominant in the air,” Gonzalez said. “I never thought I’d be winning it [MVP].” The central defender, whose absence early in the season was a key factor in the Galaxy’s slow start, was in top form.

“He was on his game,” Davis said. “He played a very good game.” Houston coach Dominic Kinnear said, “Everything was working for him tonight.”

The loss was a tough one for Houston. They had their chances and were not able to contain the Galaxy momentum when it came for the defending champions.

“The first goal changed the momentum for sure,” Kinnear said. “You know they’re going to have their moments.

“We gave ourselves a chance to win the game.”

Referee Silviu Petrescu and the assistant referees provided a Canadian connection as Houston’s Andre Hainault, from Montreal, did not see any action.

For only the second time in MLS history, the same two teams met in consecutive MLS Cups—the Dynamo won two straight titles over the New England Revolution in 2006 and 2007. This time, they found themselves on the losing end of two straight finals.

The Galaxy became only the second team, after DC United, to have won four MLS Cups. But next year they’ll be without Beckham and possibly Donovan.

“I just hope people have enjoyed me playing here,” Beckham said. “I hope I’ve brought a bit of interest to the game.”

For Donovan, it’s been a long two years and the mental and physical burnout has taken its toll. “My gut says to get away for a while. I want to be close to the family.”

It’s been a magical two years for the Galaxy who won their two titles in completely different ways. Last year, they were dominant from start to finish, while this year, they overcame an awful start to the season to defend their crown.