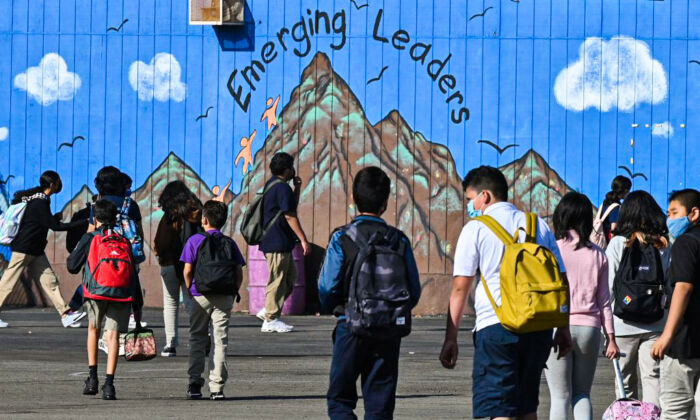 Students walk to their classrooms at a public middle school in Los Angeles on Sept. 10, 2021. (Robyn Beck/AFP via Getty Images)
Southern California

The Los Angeles County Board of Supervisors unanimously approved July 12 a motion instructing county departments to collaborate with the Los Angeles Unified School District (LAUSD) and other school districts on increasing campus safety.

The motion was a response to violence in local schools and the recent national spate of school shootings. Specifically mentioned was the massacre in May in Uvalde, Tex., that left 19 students and two teachers dead, and 17 others wounded.

The departments will work with the districts in areas with high rates of violence to support student safety and well-being.

“Too many students across LA County are impacted by violence on campus, in their homes, and in their communities,” the motion said. “This can be in the form of bullying, suicide, domestic and intimate partner violence, and community and gang violence. Increased violence in the county, along with the COVID-19 pandemic, has resulted in the loss of social and school connectedness … making it difficult for youth to thrive.”

The motion cited a report by the Centers for Disease Control and Prevention (CDC) that revealed 13 percent of LAUSD high school students avoided going to school in 2019—the year before the pandemic lockdowns—because they felt unsafe at school or traveling to or from it.

The motion called the Uvalde shootings “an urgent call to action to do more to support youth and schools. These forms of violence are interconnected and require a holistic approach that includes prevention and intervention strategies.”

The motion directed district departments to do the following:

The county Office of Violence Prevention was tasked with reporting back to the board with its findings in 180 days.

The action comes after LAUSD Superintendent Alberto Carvalho pledged in May to expand school safety in the wake of the Uvalde shooting. Details of the superintendent’s plan have not yet been released.

In 2020, the LAUSD Board of Education, which is separate from the Board of Supervisors, voted to slash the school police’s budget by $25 million. Despite the more recent concern about school violence and calls from the local teachers’ union to further defund the LA School Police Department, Carvalho opted to keep its budget at $13.2 million for the 2022–2023 school year, roughly the same as the previous year’s.

Last month, the county board unanimously approved another motion (pdf) by Supervisor Holly Mitchell that changes the safety contract process between county schools and the LA Sheriff’s Department.

Previously, school boards and administrators negotiated safety contracts directly with the sheriff’s department, and the contract then was sent to the Board of Supervisors for approval.

Under the new system, schools seeking a safety contract will need approval from the county’s Office of Inspector General before beginning negotiations with law enforcement.

The motion also calls for expanding schools’ safety services to include mental health and behavioral specialists that focus on “restorative justice,” over “punitive practices” such as arrest.

“There is a need to comprehensively improve school climate and safety in many communities. and that requires providing additional support, such as mental health services,” Mitchell said during a June 8 board meeting. “So, to that end, this motion takes steps toward providing school districts with more options, not less.”

On July 12, the board also approved a motion directing county attorneys to draft a proposed ballot measure that would give the board the power to remove an elected sheriff from office for cause. This is part of the board members’ recent clashes with County Sheriff Alex Villanueva for his crime crackdown policies. Villanueva, a registered Democrat, is running for re-election this November.

A spokesperson for LAUSD, along with spokespersons for Mitchell and Supervisor Hilda Solis, who also is backing the ballot measure, did not respond to a request for comment by press time.