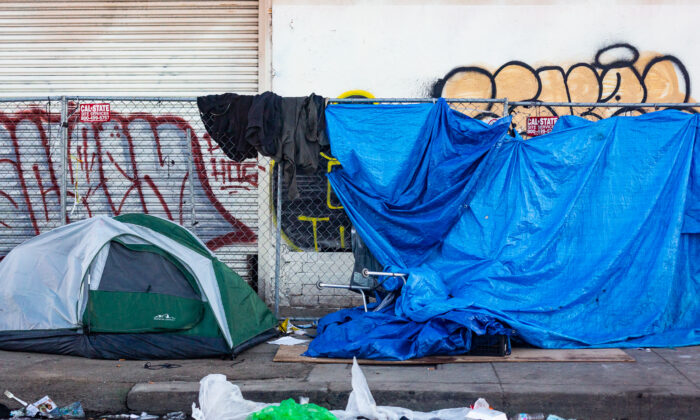 LOS ANGELES—The Los Angeles City Council voted Aug. 2 to ban homeless encampments within 500 feet of schools and daycare centers, following an hour-long disruption by opponents who interrupted the meeting with chants and shouts in the council chamber.

But due to a technicality, the council will have to vote on the matter again next week.

The council voted 11–3 Tuesday in favor of the measure after returning from the prolonged recess, with Council members Mike Bonin, Nithya Raman, and Marqueece Harris-Dawson dissenting.

The ordinance is an amendment to the city’s sweeping law regulating the location of homeless encampments. Municipal Code 41.18 prohibits sitting, sleeping, lying, or otherwise obstructing the public right of way in several areas of the city.

The interruption began when Councilman Joe Buscaino, who first proposed the idea of an encampment ban near schools last year, rose to speak. Members of the audience started chanting, “Shut it down!” and prevented Buscaino from speaking. Martinez then announced a 15-minute recess that ended up lasting around an hour, while more than 50 people remained in the council chamber, chanting and making speeches accusing the council of criminalizing homelessness.

“That was the greatest standing ovation I’ve ever received in my career, but it also says a lot about a group of people who want to shut down democracy,” Buscaino said after the chamber was cleared of protesters and the council returned to take the vote.

The council initially voted 10–1 in favor of the ordinance last month, with Bonin dissenting. Since that initial vote was not unanimous, a second vote was taken Tuesday. Ordinarily, the second vote would mark the final approval of the ordinance, however, due to a procedural issue involving the motion that was approved Tuesday, the matter will have to return for one more vote next week, city officials said.

Opponents of the ordinance packed the council chamber Tuesday in a spirited public comment session prior to the disruption, heckling the council members, snapping their fingers, and holding signs that read, “Repeal 41.18.”

The law already bans encampments in the public right of way within 500 feet of “sensitive” facilities such as schools, daycare facilities, parks, and libraries—but only if each specific location is designated by the council for enforcement.

The new amendment is a blanket ban on encampments within 500 feet of all schools.

Although Buscaino originally proposed the idea last year, it never gained traction. But the issue was revived earlier this year, in part at the urging of Los Angeles Unified School District Superintendent Alberto Carvalho, who said teachers, principals, and parents have expressed concerns about homeless encampments near campuses.

“I’ve seen elementary schools with conditions that none of us as parents would find acceptable for children. Individuals with mental illness, some of them absolutely unclothed, shouting profanities in the listening ear of children,” Carvalho told the council previously.

Council members who supported the ordinance pointed to keeping kids safe, with Councilman Mitch O’Farrell pushing back against the protesters and claiming it is a false narrative that the homeless have nowhere else to go. He said the city doesn’t do sweeps, has various successful and robust programs to serve the homeless, and is ramping up temporary shelters in his district.

“I’m going to stand up for this council,” O’Farrell said. “Everyone here is compassionate, deeply caring of people who are the most vulnerable among us. I’m not going to buy into this rhetoric that we’re monsters, that we’re murderers, or anything like that. It’s all nonsense. I’m just not going to accept that false narrative any longer. We should never accept it at all.”

But Bonin argued that the ordinance is based on a false premise that homeless people are refusing to go indoors and that the city has ample space for them. He claimed that 60 percent of people living on the streets of Los Angeles can’t find shelter, referring to a lawsuit that the city settled in April.

He called the ordinance a “distraction from where our focus needs to be,” draining time and energy away from tangible steps to end homelessness. Bonin received a standing ovation following his remarks.