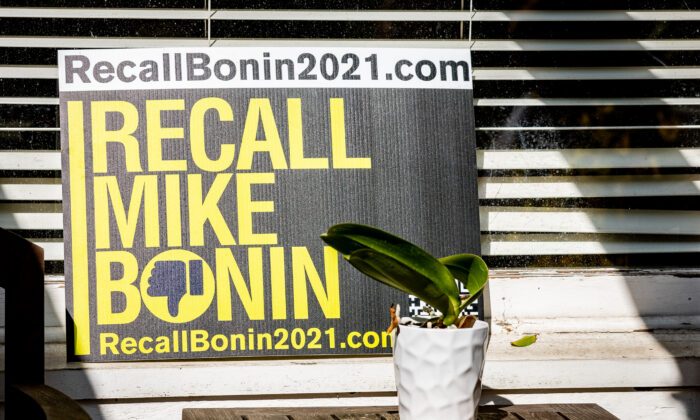 Bonin was elected to District 11’s council seat in 2014 and reelected in 2017 by winning 71 percent of the vote. During his election campaign, Bonin promised to address crime, safety, and homelessness in the district.

However, Recall Bonin 2021’s website claims Bonin failed to address these issues as homelessness and crime have been growing in the area.

In 2020, the Los Angeles Homeless Services Authority reported more than 3,200 homeless people living on the streets in Bonin’s district—up from the previous year’s 2,339 unhoused.

Bonin also vowed to crack down on violent crime and increase police patrol during both his 2014 and 2017 election campaigns, and his increasing bike police presence on the Venice boardwalk in 2014 was a part of the effort.

However, in 2020, Bonin changed his tune when he voted to cut the city’s police funding by $150 million.

Rick Swinger, Venice Beach resident and recall campaign volunteer, previously told The Epoch Times that many former Bonin voters have signed the recall petition because “they are stepping on needles, they are stepping on feces, and they see their beach being polluted, and their sidewalk being blocked [by tents].”

Bonin referred to the recall efforts as “a choice about how we respond to homelessness” in a tweet on Nov. 10.

“It’s a choice between housing and services, which work, or criminalization, which fails,” Bonin tweeted. “If the recall succeeds, it will empower those who think homelessness can be solved with handcuffs, something our city has tried and failed at for decades. We risk giving up on an evidence-based approach of housing and services, which began in earnest in just the past few years.”

Though the city’s ordinance 41.18 prohibits encampments in public “sensitive-use” areas such as schools and parks, enforcement of the ban in a district requires a motion to be introduced by a district councilmember and approved by the council.

To date, Bonin and Nithya Raman, who represents District 4, are the only two councilmembers to not enforce the encampment ban in their areas, and have repeatedly voted against other councilmembers’ motions to ban encampments in their districts.