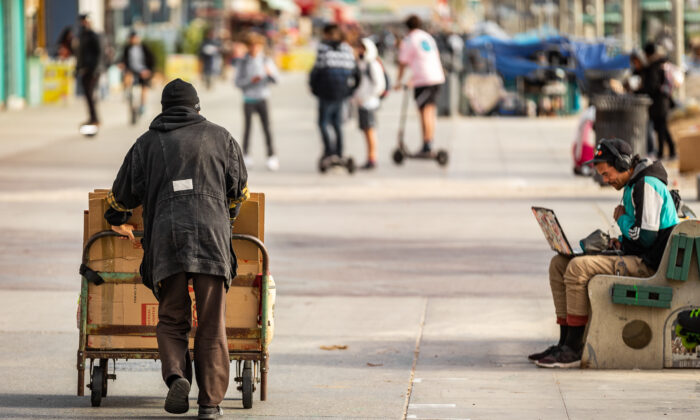 LOS ANGELES—Some City Council members are calling for options to have a third party conduct a count of Los Angeles’ unhoused population and a multi-year audit of the Los Angeles Homeless Services Authority’s (LAHSA) previous counts, according to two motions filed Sept. 20.

LAHSA has conducted point-in-time homeless counts every year since 2015—with the exception of last year due to the coronavirus pandemic. This year’s count, released earlier this month, showed a 4.1 percent increase in the number of unhoused people in Los Angeles County since 2020.

The city saw a 1.7 percent increase in homelessness since 2020, but Council President Nury Martinez’s office noted that the trends were not consistent across council districts.

Martinez, who introduced both motions, sought an evaluation of the effectiveness of LAHSA’s count and a report with options on conducting a third-party point-in-time count. That motion was seconded by Councilmen Kevin de León and Paul Krekorian.

“While the data is useful in gaining a general understanding of the homeless trends across years, it is unclear whether the current approach is most effective and accurate,” the motion stated.

Martinez and de León called for more information from LAHSA and the city’s housing department regarding the progress of housing interventions between the 2020 and 2022 point-in-time counts. They also called for a report on intervention strategies implemented by each council district in the past five years. That motion was seconded by Councilmen Mitch O’Farrell and Curren Price.

De León said several council districts have been leading the city in creating housing, but those numbers were inconsistent with the point-in-time report.

“Angelenos deserve to see how those housing units are being filled and where unhoused residents are being placed,” de León said. “The hard work of creating homeless housing shouldn’t fall on just a handful of districts.”

According to the motion, the differences between districts “raise concerns as to whether low-income and communities of color are bearing more than their fair share.”

“We do not have any guarantee that units we are working hard to build will actually go to people experiencing homelessness in the surrounding community,” Price said. “We cannot ask our constituents and taxpayers to carry the burden of ending this humanitarian crisis without delivering on our promise to see the people in our own neighborhoods housed first.”