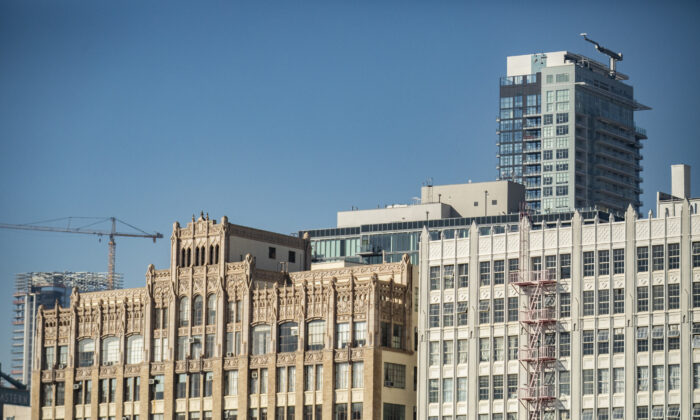 LOS ANGELES—The Los Angeles City Council voted on Friday, May 27, to try to buy a 124-unit housing development in Chinatown by exercising the power of eminent domain, in an effort to freeze rent increases by the landlord, who does not want to sell the building to the city.

Councilman Gil Cedillo, who represents the neighborhood, said the vote is “a major step” in the acquisition of the building and a “part of the very extensive process of eminent domain.” Councilors voted 12–0 to begin the process to force the sale of the private property.

Residents of Hillside Villa Apartments at 636 N. Hill Place have lobbied since 2020 for the city to use eminent domain to purchase the building, saying that the landlord increased some rent prices by as much as 300 percent after the building’s affordability covenant expired.

The apartments were constructed with loan assistance from the then-Community Redevelopment Agency of Los Angeles. In exchange for the loans of about $5.5 million, a 30-year affordable housing covenant was negotiated with the property owner. That agreement expired in August 2020.

Landlord Tom Botz told City News Service on Wednesday he does not plan to sell the property to the city. According to a report by the Los Angeles Housing Department, if he does not sell, the City Council and the mayor would have to approve the initiation of the eminent domain process in order to purchase the property.

Bolz’s attorney Patrick Hennessy spoke at the meeting that he believes Section 8 vouchers “are the best way to keep people housed at Hillside Villas.”

Botz’s other attorney, Michael Leifer, sent a letter to council members Monday saying that “there are a maximum of 37 households at HVA that are at risk of being displaced as a result of the rent increases to market that were effective on Feb. 1, 2021, after HVA’s 30-year covenants expired.”

“The city should simply give these 37 households Section 8 vouchers, which the LAHD Report suggests they are eligible for, and HVA would be happy to have them stay. The problem would be solved,” Leifer said.

Leifer added that the city failed to prepare for the affordability covenant expiring, and that considering eminent domain “would have a chilling effect on any developer ever trusting the city again to live up to it’s end of the bargain when constructing affordable housing with rents restricted for an agreed-upon term.”

In September 2020, the Department of General Services commissioned an appraisal of the property that established a hypothetical market value leased fee of $45.695 million.

Following Friday’s approval of the motion, the council will now instruct the City Administrative Officer to prepare a reserve fund loan proposal of up to $45.695 million to initiate the purchase. The loan funds would be repaid within two to three years by a developer or nonprofit entity selected through a bidding process.

Based on the initial appraisal, the cost would be about $362,000 per unit, and it is easier for families already living there to remain rather than build new affordable apartments, Cedillo said last year—adding that the potential purchase is “probably one of the most cost-effective purchases that we will engage in.”

However, the City Administrative Officer estimated last year that the total cost to acquire, rehabilitate, and adequately relocate existing tenants on a temporary or permanent basis to comply with affordability requirements would cost nearly $60 million. The City Council’s vote on Friday includes a request for an updated appraisal.

Leifer, one of Botz’s attorneys, also said the $46 million appraisal is a “lowball,” and an updated appraisal could come out to $700,000 per unit.

Cedillo said he previously came to an agreement with the owner to stop rent increases for another decade but the owner withdrew from the agreement after it was announced to the public.

“From that point forward my office has pursued the various procedures that are involved to prepare for eminent domain,” Cedillo said.