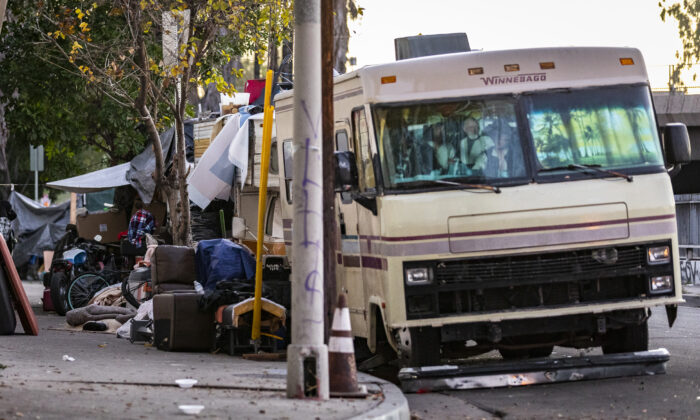 On March 11, the LA City Council unanimously approved four resolutions to ban RVs over six feet tall from parking along certain streets in Districts 7, 12, and 15 between the hours of 2 a.m. and 6 a.m.

The newly banned streets in District 7 include San Fernando Road and Haddon Avenue near the UCLA Medical Center, and Bledsoe Street and Foothill Boulevard near Sylmar Recreation Center and Park.

Another resolution bans overnight RV parking along both sides of San Fernando Mission Road in District 12, while in District 15, RV parking is now prohibited along a segment of West 9th Street by Hancock Park in San Pedro.

Consequently, councilors must instead use a state vehicle code and a city municipal code to introduce resolutions to ban RV parking along specific streets within their own districts.

It comes as Angelenos have been complaining that RV encampments bring more crime and illegal dumping in the surrounding area.

Playa Del Rey resident Lucy Han told The Epoch Times that the 60 RVs parked in her neighborhood have led to an increase in crime, drug use, sex trafficking, and meth labs.

Han called on the council to end the moratorium on RV parking enforcement and to find appropriate parking spaces for people living in their cars and RVs.

In January, the Los Angeles County Board of Supervisors moved to break up RV encampments that have become hot spots for crime.

“The amount of crime that has increased around RV encampments is unprecedented,” Supervisor Holly Mitchell said during a Jan. 11 board meeting. “The sheriff’s department reported a 68 percent increase in calls near stations regarding crime within and around RV encampments. This is really an entirely new crisis that we need to address with absolute urgency for the health and safety of all of our residents.”

Mitchell also recommended updating data on locations where crime has increased around RV encampments; the last county report on RV encampments was completed in 2018, she said.

The Board of Supervisors’ report is expected to return on April 11.