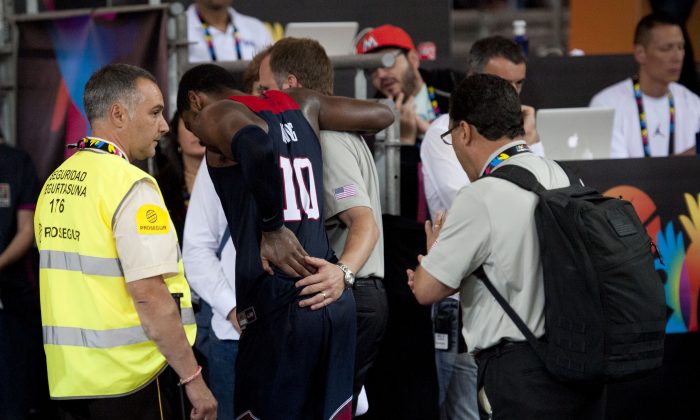 Kyrie Irving of the US, is helped off the court after falling, during the Group C Basketball World Cup match against Ukraine, in Bilbao northern Spain, Thursday, Sept. 4, 2014. The 2014 Basketball World Cup competition take place in various cities in Spain from Aug. 30 through to Sept. 14. (AP Photo/Alvaro Barrientos)
Sports

Kyrie Irving appeared to re-injure his hip in the FIBA basketball game against Slovenia on Wednesday.

Irving landed on his back and partially his hip after getting fouled on a jump shot.

Derrick Rose quickly came in as a substitution.

Irving later came in at the start of the second quarter.

He played against Mexico on Saturday but admitted he was in pain.

“I couldn’t even sit down on the bench,” Irving told ESPN on Monday.

But he says that he didn’t want to miss the game.

“I really wanted to be out there,” Irving said.

“This is by far the biggest stage I’ve played on in my career. Nothing is guaranteed. If we lose, there’s a lot at stake‎.”

Despite having four point guards on the initial roster, the U.S. only has Irving and Rose, though James Harden and Stephen Curry can also handle the ball.

John Wall and Damian Lillard were cut when the roster was pared down before the tournament.