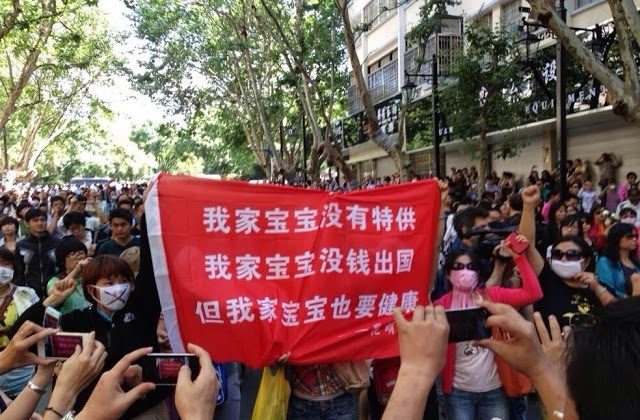 Protesters hold up a banner about pollution, comparing their situation with that of communist officials. "My child doesn't have a special supply of clean air, water or food, my child doesn't have money to go abroad, but my child needs to be healthy too!" (Weibo.com) This is what saying on the red banner.
China

Over 2,000 protesters gathered in the southern city of Kunming on Thursday to demonstrate against a chemical refinery development, the second demonstration there in less than two weeks.

The residents are concerned about air and water pollution from a facility being built by PetroChina, a major state-run oil company, that is expected to generate up to 10 million tons of refined oil per year, along with other products, including the carcinogenic chemical paraxylene (PX).

The oil giant has so far failed to make the environmental impact assessment public, but local officials are saying the project is vital for the local economy, and will meet environmental and safety standards.

Kunming mayor Li Wenrong promised that they would cancel the project “if most of our citizens say no to it,” according to the state-run Xinhua.

The demonstrators formed an organized march, some carrying banners and wearing PX face masks. They stopped outside the Yunnan Province government headquarters, where hundreds of police officers were lined up waiting for them.

Mr. Liu, a nearby restaurant worker, told The Epoch Times that some of the roads were blocked due to the crowds. “People holding banners were marching agitatedly, and there were a lot of police around. Later on there was a clash, and apparently some protesters got beaten up.”

Kunming resident Ms. Huang added that people have been hoping things would improve in the area as there has already been a lot of development and associated pollution. “We are all worried our health and environment will be damaged due to massive pollution.”

Posts about the protest were deleted from Sina Weibo, and the terms “Kunming+PX” are censored, according to freeweibo.com, a platform designed to search censored posts on the Chinese microblog.

A local netizen with the handle “Woshi Tuopima” said, “Just because of a PX project, Kunming colleges have not allowed asking for leave within 3 days, and every student has to be there for morning and afternoon roll calls, with random sampling by the city education committee. Students who are absent will be punished and given a bad record for life. It affects your career and whether you’ll be accepted for job applications. Is this how they listen to people?”