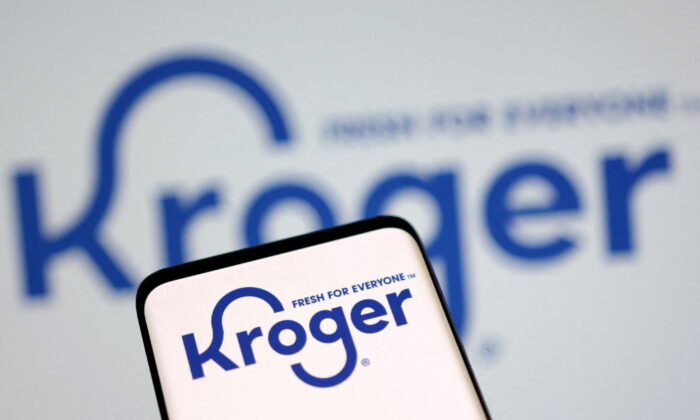 Kroger logo is displayed in this illustration taken September 5, 2022. (Dado Ruvic/REUTERS/Illustration)
US

Kroger Co raised its annual sales and profit forecasts on Friday as inflation-hit consumers drive up demand for groceries and household essentials at the cost of discretionary goods.

Grocery retailers tend to perform well in an economic turmoil as cash-strapped consumers prioritize spending on food and other essentials, with Kroger also benefiting from demand for its cheaper in-house items such as cheese and meats.

The grocery businesses of larger rivals Walmart Inc and Target Corp have seen a jump in sales in recent months as well.

However, the big box retailers’ larger dependency on apparel and other discretionary products that have fallen out of favor has led to inflated inventories, more discounts and a drop in profits.

Kroger, which is focused on groceries, reported a 56.5 percent jump in attributable profit to $731 million in the second quarter. Excluding one-off charges, it earned 90 cents per share, beating estimates of 83 cents a share.

Profit margins at Kroger, which has gas stations attached to many of its stores, were also likely helped by an increase in fuel prices, BMO Capital Markets analyst Kelly Bania said.

Kroger forecast adjusted same-store sales growth of 4 percent to 4.5 percent for fiscal 2022, compared with its prior outlook of a 2.5 percent to 3.5 percent increase.

Same-store sales, excluding fuel, climbed 5.8 percent in the second quarter, compared with estimates of a 4.6 percent rise, according to IBES data from Refinitiv.

(Reporting by Uday Sampath and Mehr Bedi in Bengaluru; Editing by Vinay Dwivedi)