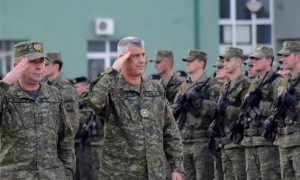 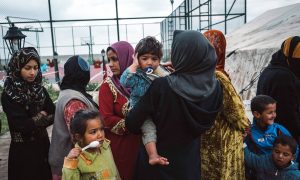 Kosovo Brings Back Fighters, Families of Jihadists From Syria
0 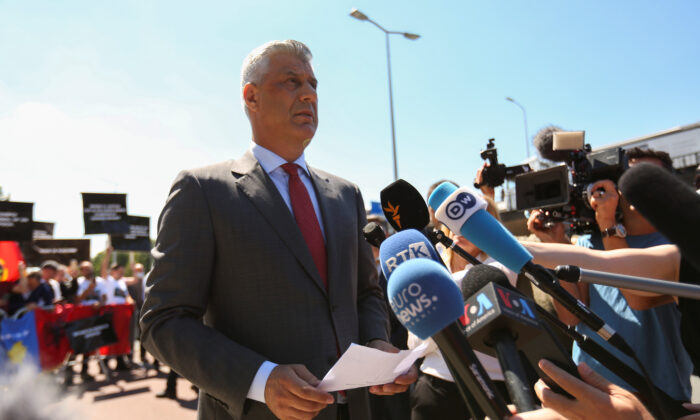 Kosovo's President Hashim Thaci speaks to members of the media before being interviewed by war crimes prosecutors after being indicted by a special tribunal, in The Hague, Netherlands on July 13, 2020. (Eva Plevier/Reuters)
Europe

THE HAGUE—Kosovo President Hashim Thaci arrived in The Hague on Monday for a meeting with prosecutors who last month indicted him for alleged war crimes and crimes against humanity during Kosovo’s 1998-99 uprising against repressive Serbian rule.

Before entering the Specialist Chamber set up in 2015 to handle cases of war crimes during the revolt that eventually led to independence for Kosovo, Thaci told reporters he stood for “truth, reconciliation, and peace”.

Thaci had earlier accepted an invitation by the court to discuss the allegations against him, and was expected to fly back home later in the day after the meeting. He has previously denied involvement in any war crimes during the conflict.

“Nobody can rewrite history. This is the price you pay for freedom,” Thaci said on his arrival at the Specialist Chamber.

The indictment, which also covers alleged crimes against humanity, is not final and a judge will now take several months to decide whether the case built by the special prosecutor’s office is strong enough to put him on trial.

Around 20 ethnic Albanians demonstrated outside the Chamber in support of Thaci, waving Kosovo and Albanian flags and chanting “U-C-K”—the Albanian language acronym for the KLA.

The Kosovo Specialist Chamber is governed by Kosovo law but is staffed by international judges and prosecutors.

War crimes allegations against the KLA first surfaced in a 2011 report by the Council of Europe rights agency that accused guerrillas of killing civilian Serbs and ethnic Albanian political opponents during the insurrection.

Local efforts to investigate alleged war crimes have so far been foiled by widespread intimidation in the tiny Balkan state, where clan loyalties run deep and former rebels are lionized.