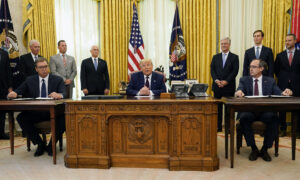 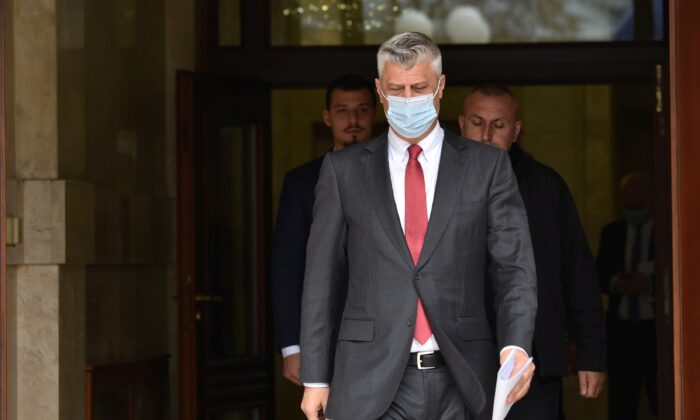 Kosovo's President Hashim Thaci arrives for a news conference as he resigns to face war crimes charges at a special court based in the Hague, in Pristina, Kosovo, on Nov. 5, 2020. (Laura Hasani/Reuters)
Europe

THE HAGUE—Former Kosovo president Hashim Thaci on Monday pleaded not guilty to all war crimes charges brought against him in his first appearance before a judge after being taken into custody in The Hague.

Thaci, who led the guerrilla uprising against Serbian forces in 1998-99 as commander of the Kosovo Liberation Army, faces 10 counts of war crimes and crimes against humanity.

“Your honor, the indictment is completely without basis and I plead not guilty,” he said, wearing a blue-grey suit and pink tie as he sat listening to the charges.

Defense lawyer David Hooper said he would request that Thaci—who after resigning as president turned himself in to European Union police in Kosovo before he was flown to The Hague—be released pending trial.

Thaci, a wartime hero turned politician, was taken to the detention center of the Kosovo Specialist Chambers on Thursday night after a war crimes indictment was confirmed against him.

His sudden departure could bring political instability to Kosovo, a fledgling democracy where the 52-year-old former guerrilla became its first prime minister upon independence in 2008 and was elected president in 2016.

Prosecutors accuse Thaci of responsibility for nearly 100 murders of civilians during the late 1990s conflict when he led forces in the KLA in a revolt against the security forces of then-Serbian President Slobodan Milosevic.

His indictment, made public on Thursday, accused him of heading a criminal enterprise that targeted opponents who were abducted, interrogated, and mistreated.

In Kosovo, a former Serbian province whose population is overwhelmingly ethnic Albanian, many lionize KLA commanders who freed the country from Serbian repression.

The Kosovo tribunal was set up in 2015 to handle cases relating to alleged atrocities by KLA fighters during and after the revolt, and was based abroad to minimize the risk of witness intimidation in a small country where clan loyalties run deep.