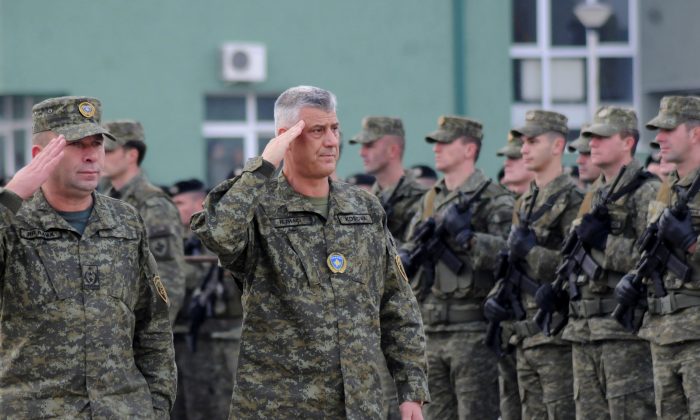 Kosovo's President Hashim Thaci attends a ceremony of security forces a day before parliament's vote on whether to form a national army, in Pristina, Kosovo, Dec. 13, 2018. (Reuters/Laura Hasani)
Europe

PRISTINA—Kosovo’s parliament voted on Friday to create a 5,000-strong standing army, a week after Serbia’s premier suggested the move could provoke military intervention by Belgrade.

The move, coming 20 years after Kosovo Albanians’ uprising against Serbian rule and a decade after independence, was lauded as “historic” by the United States but NATO criticized it as unhelpful in efforts to ease tensions between Kosovo and Serbia.

Legislation to transform the lightly armed Kosovo Security Force, which was created mainly for crisis response, civil defense and removal of ordnance from the 1990s conflict, into an army was approved by 105 deputies in the 120-seat assembly.

Eleven minority Serb deputies boycotted the vote. Kosovo’s constitution mandates the creation of a national army but no action was taken for years while Pristina sought, in vain, to obtain the approval of Kosovo Serbs.

The move is also strongly opposed by Kosovo Serbs’ patron Serbia, which has refused to recognize the independence of its former province and warned that a national Kosovo army could destabilize the Western Balkans.

“I regret that this decision was made despite the concerns expressed by NATO,” NATO Secretary General Jens Stoltenberg said in a statement on Friday.

“The North Atlantic Council will now have to re-examine the level of NATO’s engagement with the Kosovo Security Force,” he said.

Though creating such an army could take years, Serbian politicians maintain that it could be used to expel remaining Serbs from Kosovo – an accusation denied by Kosovo Albanian leaders who rely on European Union and U.S. support for reforms and development of the small, impoverished Balkan country.

Serbian President Aleksandar Vucic will be inspecting troops along the Kosovo border over the next three days, his office said on Thursday.

NATO-led peacekeeping mission to Kosovo still has around 4,000 troops in the landlocked country.

Balkans analysts, however, said any action by Serbia’s 28,000-strong army against Kosovo is highly unlikely given Belgrade’s aspirations to join the EU and that Brnabic’s remarks appeared to be a sop to Serbian nationalists.

With the new law in place, Kosovo will set up a defense ministry and the future army is to be comprised of 5,000 active soldiers and 3,000 reservists. Pristina government officials said the process would last at least 10 years.