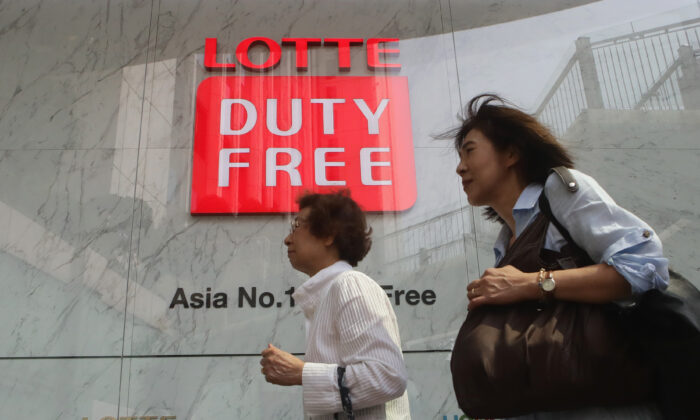 Lotte Group has fully abandoned the Chinese market and stepped up its investment in Southeast Asia, in particular Vietnam and Indonesia.

In 2020, Lotte Group ranked fifth among Korean chaebols—large family-run conglomerates—after Samsung, Hyundai Motor, SK, and LG. Lotte is the only one of Korea’s top 10 conglomerates with headquarters in Japan.

Lotte World Tower, its Korean headquarters, has 123 stories and is 555 meters high. It is the sixth tallest skyscraper in the world, surpassing New York’s One World Trade Center. Lotte’s business scope includes food, department stores, entertainment, finance, chemicals, and many other fields.

Shin Dong-bin, CEO of Lotte, said at a groundbreaking ceremony on Sept. 2 that the project is a “starting point” for expanded investment in Vietnam.

“As this year marks the 30th anniversary of the establishment of diplomatic ties between South Korea and Vietnam, and with this project as a new beginning, Lotte Group will further expand its investment in Vietnam,” Shin said during the ceremony.

Other Vietnamese and Indonesian Investments

In addition to the smart city project, Lotte is currently building Lotte Mall Hanoi. The large commercial center, with a total investment expected to reach nearly $300 million, will be completed next year.

The Korean conglomerate is also expanding its operations in Indonesia, focusing on the chemical sector. The Lotte Chemical Indonesia New Ethylene (LINE) project, Lotte’s largest overseas investment, is under construction, with a total value of $3.9 billion. Through this project, Indonesia will secure its first naphtha cracking center (NCC) and lay the foundation for the development of the local petrochemical industry.

Lotte is still suffering the effects of the CCP’s anger after the THAAD incident five years ago. The conglomerate, which provided land for an anti-missile system, was the biggest victim of the CCP’s economic retaliation against South Korea.

CCP authorities strongly opposed the deployment, on the grounds that THAAD’s powerful radar could be used to monitor Chinese territory. The Chinese regime launched a series of economic measures against South Korea, including a ban on Korean dramas and movies in China, banning travel to South Korea, and cracking down on South Korean enterprises in China.

In February of 2017, Lotte agreed to sell a golf course site to the South Korean Defense Ministry for the deployment of the THAAD  system. The move aroused protests from the CCP.

In an editorial titled “China has no choice but to punish South Korea by Cracking Down on Lotte,” the Global Times urged “an end” to the development of Lotte Group in the Chinese market. The editorial also argued that China should “gradually escalate import restrictions on South Korean cultural products until they are completely banned if necessary.”

China Youth Daily said in a commentary that a Chinese boycott of Lotte had become a “reasonable inevitability.” Hong Kong’s Ta Kung Pao newspaper, which is controlled by Beijing, also ran a commentary, saying that Lotte’s actions were unacceptable and it should “go home.”

Meanwhile, the CCP incited protests and boycotts of the company. In Zibo City, Shandong Province, protesters held a 10-meter-long banner that read, “The security of the motherland is inviolable.” In Xuchang City, Henan Province, employees of a shopping center stood in rows, holding banners protesting Lotte and singing the CCP’s anthem.

Lotte Pulling Out of China

Lotte’s various businesses in China struggled as a result. All of its 115 stores in China have closed since 2018.

In 2014, Lotte Group announced plans for a 67,000 square meter theme park with a department store, theme park, hotel, and apartment complex in Shenyang, China. After the THAAD incident, the project was suspended for years. It was finally approved by Chinese authorities in April of 2019, but construction was again halted by the pandemic, and the project’s future is uncertain.

Lotte Shopping continued to operate stores in China after the THAAD incident. However, in July the group decided to sell its last department store, in Chengdu. With the sale, Lotte will effectively give up its retail business in China after 14 years.

Lotte Group is estimated to have lost about 2 trillion won ($1.5 billion) in China alone due to the THAAD incident.