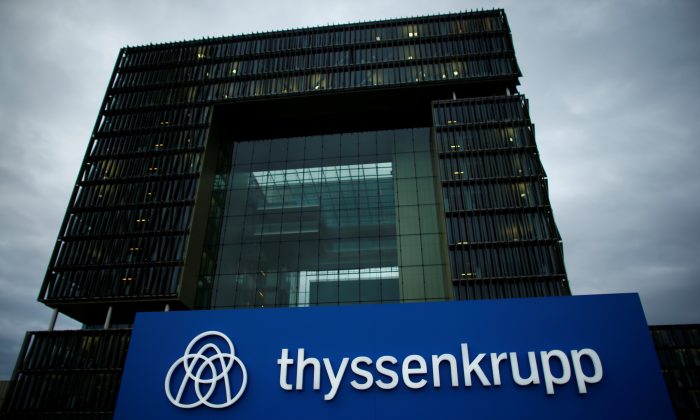 A logo of ThyssenKrupp AG is pictured outside the ThyssenKrupp headquarters in Essen, November 23, 2017. REUTERS/Thilo Schmuelgen
Companies

FRANKFURT/DUESSELDORF—Finland’s Kone is assessing the viability of a bid for Thyssenkrupp’s 14 billion euro ($15.7 billion) elevators division even as the German conglomerate pursues plans to list it, four people familiar with the matter said.

Thyssenkrupp last week ditched a plan to spin off its capital goods business after months of shareholder criticism and opted instead to list elevators, its most profitable division, to raise badly needed cash.

The sources said it was not clear if Kone could fund an all-cash bid and whether or not the deal would face significant anti-trust hurdles similar to Thyssenkrupp’s failed steel joint venture with Tata Steel.

This is why Thyssenkrupp’s management prefers the option of an initial public offering, the sources added.

“What the company needs is guaranteed proceeds. The IPO is a safe option. Other options are subject to execution risk,” a person familiar with the matter said.

Analysts at Barclays said although the merger would be likely to face opposition from Thyssenkrupp’s labor representatives, a deal with Kone would result in 3-4 billion euros of synergies attributable to the German firm.

“Why give away half the synergies which could be extracted from a potential elevator merger with an IPO of 50% of ET?” the bank said in a note.

Thyssenkrupp has also said that it is open to partnerships in its other businesses. People close to the matter said that previous talks with gases group Linde over a merger of engineering activities could be revived.

Thyssenkrupp boss Guido Kerkhoff, who is under pressure to deliver after the botched overhaul, hopes an IPO of a minority stake in the elevators business would repair the group’s stretched balance sheet.

But Kone, whose top investor Antti Herlin approached Thyssenkrupp in 2016 over an elevator merger, is willing to do a deal and is working with Bank of America to explore options, three people familiar with the matter said.

“It’s only natural that Kone is looking at its possibilities now that Thyssenkrupp has signaled a willingness to pull out partly,” one of the people said.

The people said a Kone bid was doable if it was shares and cash.

“We’ve been saying for years that consolidation would make sense in our industry and our thinking hasn’t changed,” a spokeswoman for Kone said, declining to comment further.

Thyssenkrupp has not given a timeframe for the listing, only saying it wants to be market-ready in the next financial year which starts in October. One source said a flotation in the second quarter of 2020 was not unrealistic.

The sources also said that Switzerland’s Schindler, controlled by the Schindler and Bonnard families, is expected to review its own options regarding the elevators business.

Schindler, which does not have a big M&A track record, may face larger antitrust hurdles in a potential deal, one of the people said, citing greater geographic overlap with Thyssenkrupp than Kone.

Possible deals for other Thyssenkrupp activities include tie-ups for the steering business in its automotive division or a merger of Industrial Solutions, which builds plants and industrial sites, with Linde, the sources said.

“Thyssen and Linde held talks on a combination of their engineering businesses about two years ago, but those did not reap any results,” one of the people said, adding that talks may be revived at a later stage.

The people said that because Linde is also seen as a seller this might allow both groups to deconsolidate the business, possibly by bringing in a private equity investor.

A spokesman for Thyssenkrupp referred to comments by CEO Kerkhoff who said that the IPO was aimed at strengthening the group’s balance sheet. He declined to comment on Linde.

Schindler, Linde, and Bank of America declined to comment.

In the second quarter, sales at the elevators business rose by 6.6 percent to 1.87 billion euros, but its adjusted operating margin fell by a percentage point to 10.6 percent, hurt by higher material prices.