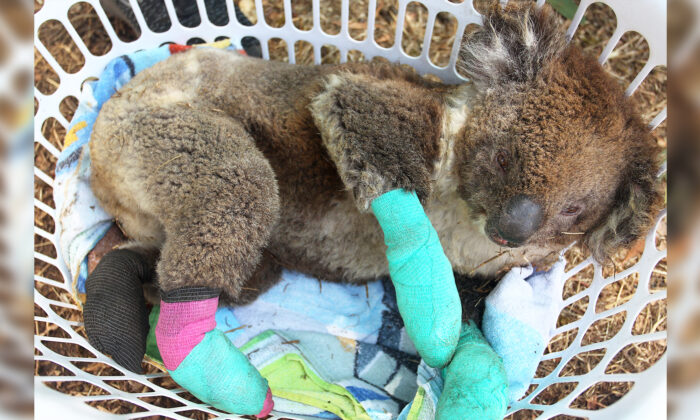 Billy was discovered clinging to a tree with four severely singed paws in a backyard in Adelaide Hills, Australia. The distressed male koala, yet another victim of the bushfire crisis, was gently picked up and driven to safety for urgent medical care.

Lucy and Adam Francis of Adelaide and Hills Koala Rescue took to Facebook around Christmastime to share news of Billy’s arrival at the shelter with their followers.

“Billy has burns to all of his paws and is is receiving daily treatments.

“He will be in care for some time as his burns heal and is monitored closely, as secondary infections from the burns can be what causes a koala’s death, rather than the burns themselves.”

Concerned by the unique nature of Billy’s injuries, the volunteer animal carers had to think outside the box. “[W]e made a makeshift enclosure for him in our kitchen so we could be close to him always,” Lucy told The Dodo.

“We used a camping mattress for him to sit on and placed a pillow behind him for him to lean back on, as it was difficult for him to sit in a normal koala position,” she continued. “He was clearly in shock, frightened, and covered in soot and ash from the fire.”

Despite the injuries resulting from his traumatizing ordeal, Billy was sweet and gentle from the very beginning. He even licked Adam’s hand upon meeting him for the first time. “We have a very close relationship with him,” Lucy said, “and he lets us handle him as we need to and clearly trusts us, despite still being very much a wild koala. […]

Billy is looking pretty pleased with himself.And why not, he has his carers dancing to his tune, which, if you have…

“His personality is so gentle and calm, even when we have to rub cream into his blisters and burns, or administer his vitamin mixture which we’re really sure he hates,” she continued, “it’s like giving a very furry, reluctant child their medicine.”

Gentle Billy, despite his ordeal, hadn’t lost his appetite for his favorite snack, either: eucalyptus leaves. In fact, just 24 hours after welcoming their badly burned patient, Lucy and Adam posted a humorous update on Facebook.

“Billy is looking pretty pleased with himself.

“And why not; he has his carers dancing to his tune, which, if you have ever heard a male koala’s bellowing tune is a pretty interesting sight to behold.

“They chauffeur him to his daily appointments, bring him the freshest leaves to eat, and give him the softest cushions and linen to rest his sooty bum on.”

Billy’s condition improved so steadily that it wasn’t long before Lucy and Adam started discussing moving him into an aviary. The space would be an upgrade from the confines of Billy’s hospital cage and an opportunity for the hungry marsupial to start fetching eucalyptus leaves for himself.

On Dec. 30, providing much-needed respite from the devastating koala death toll amassing elsewhere, the couple celebrated Billy’s progress by calling him a “fighter.”

“Today he has his boxing gloves on (aka bandages),” they posted on Facebook. “It’s still early in the fight and he’s doing it tough. Daily vet visits, medications, formula.”

Billy, while frustrated by the limitations to his dexterity imposed by his “boxing gloves,” was nonetheless able to enjoy his new enclosure. At this stage in his recovery, Billy was still relying upon his carers to feed him tasty branches of eucalyptus and could not climb on his own, but his champions remained certain that Billy would “emerge victorious.”

On Jan. 9, 2020, the rescuers had good news to report. Taking to Facebook once more, Billy’s rescuers posted:

“Billy has traded in his boxing gloves and socks for a single fingerless glove on one hand and a toeless sock on one of his back feet. This is great news because it means Billy is doing really well.

“By way of a celebration he went straight for the eucalyptus and stuffed his little face.

“He will be back climbing trees in no time at all.”

Lucy told The Dodo, “We can’t wait to see him fully recover, although he will leave a very big Billy-shaped hole in our home and in our hearts.”