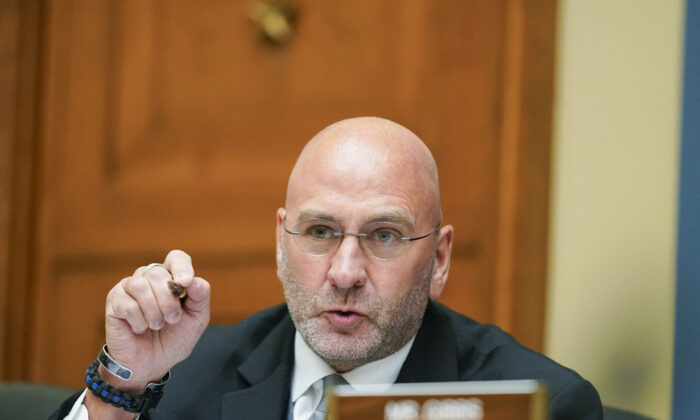 Known and suspected terrorists are entering the United States in unprecedented numbers amid a surge in illegal immigration, according to Rep. Clay Higgins (R-La.).

In an interview with NTD, sister media outlet of The Epoch Times, the Louisiana representative said the Biden administration was providing “absurd” figures on the actual number of known and suspected terrorists entering America through its borders.

Higgins, a decorated law enforcement officer, said he believed the number to be much higher, in part owing to the number of suspected terrorists who have aggressively avoided interaction with law enforcement at the border, referred to as “got-aways.”

Higgins’s comments come after Border Patrol agents captured 50 people who were on the FBI’s terror watchlist from October 2021 to May 2022.

That figure was just 15 in the fiscal year 2021, which included several months under former President Donald Trump’s administration.

“Toward the end of last year [2021], I had estimated that we had lost about 250 KSTs, known and suspected terrorists, so the total numbers now that we’re told could serve about 700,000 ‘got-aways’ are suspected to have crossed into America. I think that’s a low number,” Higgins said.

“From my perspective, with data delivered to me by boots on the ground, from the border and from Central America and Mexico, and from the official numbers that are delivered to Congress from official data collection processes with Customs and Border Patrol, I think it’s reasonable for Americans to sort of step back and say, ‘My God, we have somewhere between 500 and 1,000 known and suspected terrorists [who] have entered into our country across our southern border since President [Joe] Biden has been inaugurated into office.’ This should startle every American citizen regardless of political affiliation.”

Explaining why he believes the actual number of suspected terrorists in the United States could be higher, Higgins pointed to Biden’s administration, which he said is using “conservative numbers” when it comes to estimating how many there are.

The lawmaker added that this is, in part, due to the “got-aways” being very difficult to catch because they aggressively run and hide from law enforcement.

Things have been made even harder, according to Higgins, because much of law enforcement at the border has been pulled away from their primary mission of securing the border to instead processing illegal aliens, giving the “got-aways” more opportunity to escape.

“So the men who are aggressively evading law enforcement, we’re looking at true numbers of probably a million, but we’ve been told 700,000,” Higgins said. “So just using a number of 700,000, and estimating that a very small percentage of that number would be a known or suspected terrorist, which fits the historical data, you could look at 700 known and suspected terrorists who have crossed into our country.

“It’s a startling number. It should frighten us all. It should drive us to greater action to confront the Biden administration’s failed border policies to insist upon the resignation of [Department of Homeland Security] Secretary [Alejandro] Mayorkas and to promise the American people that if Mayorkas doesn’t resign, he’s going to be impeached.”

Higgins added that huge numbers of those individuals who are evading law enforcement at the border are working for Mexican drugs cartels, and pointed to the rising number of fentanyl deaths in America.

According to data from the nonprofit group Families Against Fentanyl published earlier this year, fatalities from the powerful synthetic opioid have more than doubled in 30 states in just two years. In 15 states, they have tripled.

The drug is now the No. 1 cause of death for Americans aged 18 to 45, according to Families Against Fentanyl.

The Drug Enforcement Administration earlier this year said that traffickers are putting fentanyl in fake prescription pills such as OxyContin and Percocet—drugs that are also widely utilized among drug addicts—in order to make them more addictive and drive up repeat sales.

“But they didn’t cross the world as a known or suspected terrorist, plugged into terrorist networks to cross into our country—a difficult and challenging journey—just for chuckles. They didn’t come here just for sightseeing.”

“They’re up to no good. We don’t know what that is. But it’s a serious problem. And it has specifically been caused and allowed by the Biden administration policies. And Secretary Mayorkas. We intend to hold them both to account.”