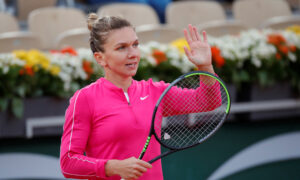 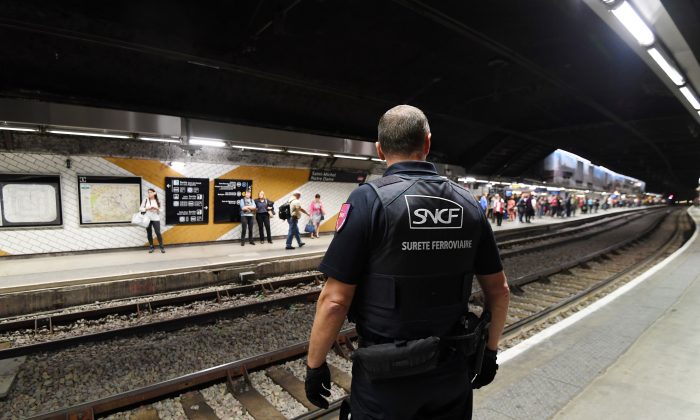 A member of the Ile de France region rail police is pictured at a subway station in Paris. (ALAIN JOCARD/AFP/Getty Images)
Europe

PARIS—France opened a counter-terrorism inquiry after a man wielding a knife attacked a soldier in a Paris subway station on Friday, the latest incident targeting troops protecting the capital’s transport hubs and tourist sites.

Paris and other European capitals are on high alert after a wave of attacks in past years by ISIS terrorist group, many of them inspired by ISIS.

The Paris incident occurred hours before several people were hurt at a London underground station. Witnesses reported a blast which police were treating as a terrorism incident.

The assailant in Paris was wrestled to the ground and arrested. The soldier, part of Operation Sentinel, a force deployed in the wake of lethal Islamist attacks on France, escaped unhurt.

Police said the attack happened just before 6.30 a.m. as the morning rush hour got under way at the Chatelet subway station, where tens of thousands of commuters converge from Paris’s sprawling suburbs every day.

Government spokesman Christophe Castaner said the investigation was being handled by counter-terrorism specialists.

A source close to the investigation said the assailant was Moroccan-born and about 40-years-old, with no known criminal background. Police raids at an address linked to the suspect were ongoing, the source added.

There have been more than half a dozen attacks against troops belonging to Operation Sentinel. In early August, a man rammed his car into a group of soldiers on patrol in the wealthy Paris suburb of Levallois-Perret.

France announced on Thursday that the 7,000-strong force was being adapted to make it more mobile and its movements less predictable.

Islamist terrorists have killed more than 230 people in a wave of attacks on French soil since early 2015 and dozens more have been killed in attacks in London, Manchester and Brussels.

French war planes have carried out bombing raids against ISIS’s strongholds in Syria and Iraq and ISIS has urged its followers to target France.

French media said the Chatelet aggressor shouted references to ISIS as he attacked the soldier.