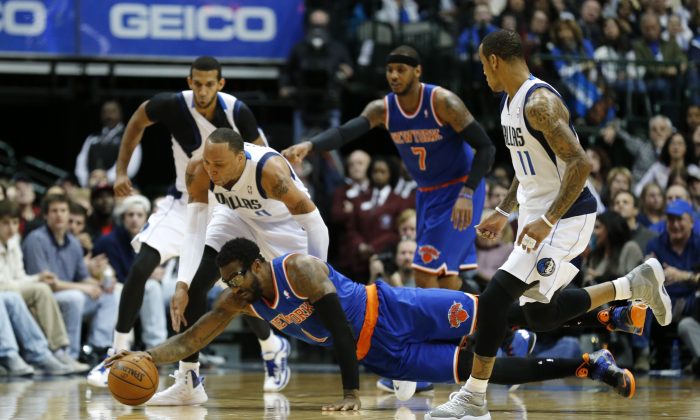 New York jumped on Dallas early and never let up.

The Knicks came out the first quarter and led the Dallas Mavs 29-17 after one quarter. Knicks forward Carmelo Anthony scored 15 of his 19 points in the first quarter. Dirk Nowitzki led the Mavs with 18 points.

Former Dallas center Tyson Chandler, who was dealing with an upper respiratory infection, left the game after just 4 minutes of action and did not return.

At the break, the score was 52-35 Knicks. The Mavs increased the scoring tempo in the third, but still trailed the Knicks 67-57. The Mavs simply couldn’t catch up after relinquishing their four-point lead in the middle of the first.

After the game, Maverick Coach Rick Carlisle said, “We were not ready to play. We need everybody to be all in and the margin of error is very thin. Very poor showing in the first half!”

Knicks Coach Mike Woodson said afterwards, “It should be a real bounce for us to get a win over the Mavericks. We are now going to the next level.”

The attendance at Sunday night’s game was 19,892 which means the Mavs have now sold out 490 consecutive regular season games at American Airlines Center, which is an NBA-best sellout streak. The streak began on December 15, 2001 and Dallas has sold out an additional 60 playoff games during the stretch.