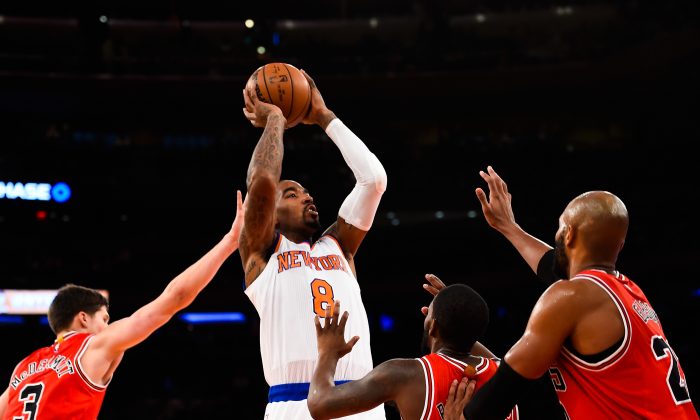 J.R. Smith #8 of the New York Knicks shoots over Aaron Brooks #0 of the Chicago Bulls in the fourth quarter during a game at Madison Square Garden on October 29, 2014 in New York City. (Alex Goodlett/Getty Images)
NBA

The New York Knicks are off to a strong start, but are still the subject of a number of trade rumors.

Check out the latest news below.

A trade that the Knicks have been exploring includes JR Smith.

The team had recent conversations with the Indiana Pacers regarding ex-Knick Chris Copeland, a league source told the New York Post.

Copeland is a 3-point specialist, but more importantly has an expiring contract so he wouldn’t affect their cap space after this year.

Smith has a $6.4 million play option after this year, and could always opt in and not be off the books until 2016.

Copeland is averaging 16 points, 4.7 rebounds, and 2.7 assists in 30 minutes a game this season so far, with a bigger role because of the Paul George injury.

A source told the Post that if a trade does happen, it won’t be until December 15–the date when 2014 free-agent signees and 2014 draft picks are eligible to be traded.

Kobe Bryant has become the subject of trade speculation, with some linking him to the Knicks and new team president Phil Jackson.

Jackson coached Bryant for many years on the Los Angeles Lakers.

Several columnists and even former Bryant teammate Rick Fox have said recently that Bryant could jump ship and waive his no-trade clause.

But Bryant has tried to quash the rumors by denying such a move will happen.

“I hear the chatter of Kobe should ask out and he should go and play for a contender in this latter stage of his career. But that’s not what I do. I’m extremely loyal to the Lakers,” Bryant told Yahoo Sports.

“I believe in fighting through the tough times as well as enjoying the good times. It’s my responsibility to get us to be the best that we can be. It’s important that we approach that on a day-to-day basis.”

Bryant said that the Lakers “did absolutely everything possible” to sign one of the top free agents during the offseason, such as Carmelo Anthony.

Carmelo Anthony says that last year’s “bad energy” is gone, and that has helped contribute to the 2-1 start.

“I think just overall, not pointing anything out, but just overall from day one last year the energy was just not right,” Anthony told ESPN.

The Knicks roster isn’t drastically different from last year but has changed a little after the Knicks traded Tyson Chandler and Raymond Felton for Jose Calderon and Samuel Dalembert, along with Shane Larkin, who is now the starting point guard.

The Knicks also got two second-round draft picks, one of which they used to pick up Cleanthony Early. The pick is widely regarded as a steal.

Anthony said that it’s not the players who are different, but the environment.

“I won’t go into details. It’s deeper than us going out and losing basketball games,” Anthony said. “For whatever reason, it happened. We looked at that. The organization looked at that. And they made some great changes.”

The Knicks will be able to match any offer made to Shumpert. The defensive specialist could garner significant attention, especially if he has a strong season.

The contracts of Amare Stoudemire and Andrea Bargnani are also set to expire, meaning the Knicks should have enough cap space to make a run at a top tier free agent next summer.

Kevin Durant leads the 2016 free agent class, unless he re-signs with the Oklahoma City Thunder.